This lonely little fortress is an evocative sight. It’s clearly visible from the A470 main road – travellers often pull in and admire its impressive silhouette.

Dolwyddelan is particularly special because it’s one of the few fortresses in Wales actually built by the Welsh people.

In fact, it’s estimated that only 7% of castles in Wales were actually built by the Welsh. The remainder were built by the conquering English – as a means to control the county.

I visited the castle on a freezing winter’s day in early 2013. It gets pretty blustery up in Snowdonia 🙂

Dolwyddelan is a small, squat fortress, seated on a steep rocky hill inside the spectacular Snowdonia National Park.

At the foot of the hill, you’ll discover the village of the same name.

The castle is a steep climb up the rocky hill. It compromises of a small Keep surrounded by a thick curtain wall. A ruined wall, adjacent to the keep, is all that remains of the West Tower.

Dolwyddelan is fantastic for photos, but there’s not much to see inside. Despite this, the view from the roof, across Snowdonia, is phenomenal.

You only need an hour to see the little fortress, and most visitors drop by whilst driving through the National Park.

A cute fact is that tickets to the castle are sold from the farm at the foot of the hill. (The castle is managed by the Welsh heritage body CADW, but the farm looks after ticketing). The site also has toilets and picnic tables.

In the summer, it is possible to buy drinks and sandwiches in Dolwyddelan village, although there’s a very limited choice.

Dolwyddelan: One Of The Few Castles Built By The Welsh Princes

Although Wales is nowadays famed for having more than 470 different castles, the vast majority of these were built by the English to maintain control of their conquered lands.

Dolwyddelan is one of a relatively small number of surviving castles which were built by the Welsh Princes.

The two Princes responsible for Dolwyddelan were Llywelyn the Great, Prince of Wales between 1201 and 1240; and his grandson Llywelyn ap Gruffud (‘Llywelyn the Last’) who died in 1282.

I’m sure you’ll have heard the phrase that ‘history is written by the winners’, and that’s quite apt when it comes to researching the heritage of these Welsh castles.

Whereas we have good documentary evidence about the vast majority of castles in England, the history of Welsh fortresses is much more hazy.

Welsh folklore says that Dolwyddelan was the birthplace of Llywelyn the Great. This is almost certainly false, as he was born in around 1172 and archeologists date Dolwyddelan to between 1210 and 1230.

However, there was an old castle at the bottom of the valley – Tomen Castell – which Dolwyddelan appears to have been superceded.

Interestingly, whereas castles in England were primarily used to stake a claim to surrounding lands, the role of Dolwyddelan seems to have been to protect the adjacent trade route through Snowdonia.

The first floors of the Keep were constructed in the early 1200s, alongside the encircling curtain wall – which, at points, is more than 1.8metres (6ft) thick.

The subsequent court of Llywelyn the Last was itinerant (that is to say, it moved around Wales), and, during the mid 1200s, occasionally operated out of the castle.

During this time, too, Llywelyn the Last appears to have stored some of his treasure here.

The English Conquest of Wales

In the late 1280s, battle-hungry Edward I of England longed to take control of Wales, and, in 1282, he embarked on a conquest of the land.

Edward’s conquest was trigged by Llywelyn’s indecisiveness – and the foolish actions of his brother Daffyd.

In 1283, Dolwyddelan fell to Edward and the English with barely any degree of resistance.

He appears to have heightened the Keep, and added more luxurious living quarters within the West Tower. If you’re wondering, the West Tower no longer survives – just a ruined wall.

A new bridge and watermill were also added to the castle in 1283.

With Dolwyddelan fortified and held by the English, Edward’s attentions immediately moved on to other sites – namely his ‘iron ring’ of new castles, which included Harlech, Beaumaris and Caernarfon.

Why Dolwyddelan Isn’t a Picture of Medieval Authenticity

The present day remains of the castle don’t really reflect Dolwyddelan’s form, back in Medieval times.

In the 1760s, improved transport was beginning to open Britain up to internal tourism.

Many visitors were drawn to Snowdonia, attracted to its spectacular scenery.

The solitary, man-made shape of little Dolwyddelan contrasted dramatically to the vast, mountainous landscape of Snowdonia.

It was a powerful symbol of developing aesthetic movements – of the Sublime and the Picturesque. The image of ruined Dolwyddelan captured the imagination of thousands of visitors.

As a result of the tourist interest, wealthy Victorian benefactors – entranced by the ruined castle’s Romantic appeal – decided to ‘restore’ the place.

Their ‘restoration’ was really a comprehensive re-building of the castle, re-creating something they thought that a Medieval castle should look like.

As a result, the castle that you’ll visit today doesn’t really represent how Dolwyddelan appeared back in Medieval times.

The Victorians more-or-less doubled the height of the Keep, and added entirely new windows on the upper floors.

Those evocative looking battlements and drainage gutters along the roof are entirely false – the work of Victorian imagination.

Indeed, if you look closely, you’ll see that the Victorian upper layers of the castle are made of neatly stacked slate, as opposed to the uneven stone of the lower layers.

Of course, none of this makes Dolwyddelan any less impressive. Just bear in mind that its Medieval authenticity has been somewhat compromised!

Continuing Your Exploration of Welsh Castles

If you’re visiting the area, you absolutely must visit the neighbouring castles of Harlech and Caernarfon.

The creation of Edward I of England, these spectacular castles are some of the strongest in the world – designed to consolidate England’s capture of Wales.

They are testament to the ambition and ruthlessness of this formidable English king. 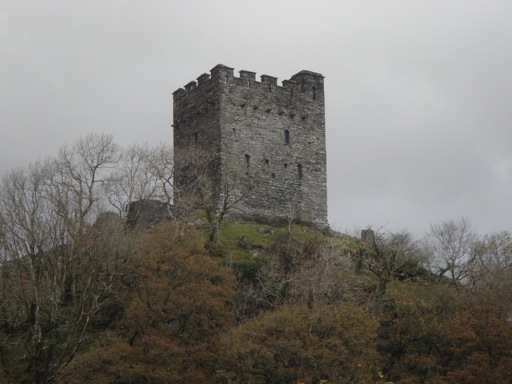