Caerphilly Castle is undoubtedly one of the mightiest fortresses in Wales – and perhaps one of the grandest Medieval buildings in Western Europe.

This formidable castle, surrounded by two huge lakes, is located in the centre of the town of Caerphilly (about 25minutes drive north of Cardiff).

The castle is particularly interesting as it was built at breakneck speed – the vast majority was built in just three years, between 1268 and 1271.

Even by modern standards, you’d be hard pressed to construct such a vast stone fortress in just three years. The fact that builders managed this more than 700 years ago makes Caerphilly quite remarkable.

Caerphilly is also an early example of the concentric castle design – a style of building which rendered castles virtually impregnable. It influenced the construction of some of the mightiest of all fortresses in Wales.

Oddly enough, the approach to Caerphilly Castle is rather unassuming. Rather than being built on a raised rocky platform, it’s hidden within a dip in a plain.

Only when you cross the first moat to the outer gatehouse does the size of the castle really become apparent.

This vast structure spreads over more than 30 acres, and is commonly cited to be the second largest castle in Britain (after Windsor Castle).

At many points, you can clearly see that the Pennant sandstone walls of the castle are more than a foot thick.

Subsidence and landslide have resulted in gaping cracks, which gnaw through many of the castle towers. Most impressively, though, is the castle’s famed South Eastern Tower.

Optimistically dubbed ‘the Welsh Tower of Pisa’, this Medieval tower leans at 10 degrees to the vertical – most likely because of subsidence. The effect is extremely impressive – especially up close.

That’s certainly not the only highlight, though. As you climb one of the towers of the main gatehouse, the castle spreads out below – spanning four more gatehouses, three mighty towers, two rings of curtain wall, and one impressive Great Hall.

Climbing the castle also grants a beautiful view of the Welsh hills which encircle this patch of flat land – and gives you a neat overview of the anglers fishing in the two huge moats.

The Creator of the Castle: ‘Red’ Gilbert de Clare

There are two personalities which shaped Caerphilly Castle. Of the two men, Red Gilbert de Clare was the more important – without him, the castle would never have come to fruition.

‘Red’ Gilbert – so called because he had firey red hair – was born in 1245, and was a young and ambitious member of the de Clare family. The de Clares were lords over much of Southern Wales from 1217 onwards.

In 1263, Red Gilbert took control of his family’s lands after the death of his father. The young man was eager to make his mark upon Wales, and had inherited his family’s acquisitive desire for land.

There was a cloud on the horizon, however. The de Clares were effectively English – ruling over Welsh lands and subjects. In Northern Wales, Welsh Prince Llewellyn ap Gruffud was running a successful campaign to reclaim Welsh lands for the Welsh people.

Prince Llewellyn was gradually approaching the de Clare’s lands, and the King of England (at that time at least) seemed wholly unbothered by the threat.

Red Gilbert decided to take the matter into his own hands, and build a vast castle to deter the advance of Prince Llewellyn – who was just miles from Red Gilbert’s lands.

Red Gilbert was swimming in a family fortune, so the vast structure of Caerphilly was commissioned and built at dizzying speed. The threat of a Welsh rebellion struck fear into de Clare’s heart (indeed, Prince Llewellyn attacked and burned some of the castle foundations in 1270).

After a phenomenally speedy building effort, the vast majority of the castle, still visible today, was finished by late 1271.

A Fortress of Unimaginable Proportions

I can’t over-exaggerate the ambition and drive of Red Gilbert. He was an aggressive young man who wanted to make his mark on the world.

The sheer scale and strength of Caerphilly Castle was unequalled within Western Europe. It was an aggressive, testosterone-fuelled project of incredible ambition.

Of course, elements of the castle were borrowed from other fortresses. Inspired by the infamous siege of Kenilworth Castle, Red Gilbert commissioned two vast lakes to surround the fortress.

The lakes were intended to deter attackers, siege engines, and even archers. By all accounts, they were very successful – Caerphilly never succumbed to siege.

Part of the castle – the East Gatehouse – was also inspired by fortresses elsewhere. It’s a close copy of a similar structure in Tonbridge Castle.

However, these architectural influences pale in significance compared to the overarching original design of the castle.

Caerphilly is an early example of the impregnable concentric castle design – effectively a castle within the walls of another castle. It was a quite revolutionary evolution of Medieval architecture.

Caerphilly’s early concentric design certainly influenced Edward I’s ‘iron ring’ of castles in North Wales, which were built around thirty years later. This series of castles includes Beaumaris and Caernarfon, both of which are protected as UNESCO World Heritage sites, because of their phenomenal design.

An Impregnable Fortress – Which Was Hardly Ever Used

Ironically enough, by the time that Caerphilly Castle was finished, the threat of Welsh Prince Llewellyn was dramatically receding.

In 1277, King Edward I was tiring of the troublesome Welsh Prince and drove him out of his reconquered lands. Caerphilly was no longer on the frontier of political dispute.

Red Gilbert died in 1295, but the strength of the castle was never really called into question. Save for a couple of minor Welsh rebellions, mighty Caerphilly survived virtually unscathed.

One interesting chapter did occur, though, in the 1320s. As Red Gilbert only had daughters and no son, the castle floundered in limbo for some years, with no obvious heir.

Eventually, the husband of his oldest daughter (Eleanor) grabbed a hold of the castle. Hugh Despenser, by all accounts, was a greedy and despicable character – cruel and also irrepressibly acquisitive.

Despenser got his grubby mitts on increasingly large swathes of Welsh land, and was hated by the people of Wales. In 1326, he also extended and aggrandised part of Caerphilly’s Great Hall – the only other chunk of Medieval construction ever to take place within the castle.

Happily though, this grim character got his come-uppance. In late 1326, he sided with the detested King Edward II, who was facing rebellion against his hapless rule of England.

The pair holed themselves up in Caerphilly, and subsequently tried to hide elsewhere in Wales from the approaching popular uprising against them, lead by Isabella of France. Both were captured – Despenser hung, drawn and quartered; and Edward forced to abdicate – and face a grisly death.

From that point, the castle fell into a state of gradual decline.

Visiting Caerphilly Castle and the town of Caerphilly

With the kindest possible intentions, there’s not much else to do in the town of Caerphilly.

You’d definitely be better visiting on a few hours’ trip from Cardiff. I’d suggest taking your own picnic on a sunny day.

Visiting will only take half a day or so, so you could comfortably squeeze in a trip to adjacent Raglan Castle, or even Cardiff Castle, if you were so inclined.

The castle is managed by the Welsh heritage body, Cadw. They lavish care on the place, and have installed some atmospheric audiovisual exhibits – for example, a cracking projection of a fire in the Great Hall – which help to bring the castle alive.

A Timeline of Caerphilly Castle

1217: The lordship of the Welsh lands of Glamorgan fell to the de Clare family.

11 April 1268: In response to the threat of Welsh Prince Llewellyn, work begins on Red Gilbert’s castle.

Late 1271: Majority of the castle completed.

1294: Welsh uprising against English rule. Most of Caerphilly is burned, but the castle survives relatively unscathed.

1326: Great Hall of the castle modernised by despised Hugh Despenser.

1326: Rebellion against the despised Despenser and weakened King of England, Edward II. The two hole themselves up in Caerphilly but were captured elsewhere in Wales – and brutally executed.

Late 1300s: Castle is unused and gradually begins to decline and disintegrate.

1428/9: Some repair work undertaken by Earl of Warwick.

1642: Construction of a Civil War battlement alongside the castle, although it’s debated if it was ever actually used.

1776: The ruinous castle passes into the hands of the Marquesses of Bute. An interest in the picturesque means visitors start coming to the castle. 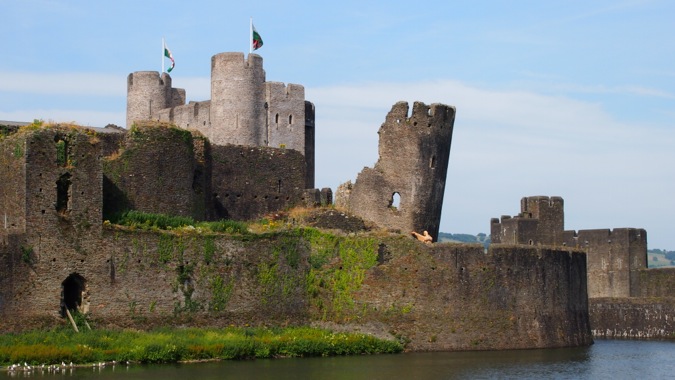 Caerphilly Castle is a vast and magnificent fortress in Wales. Discover its secrets, alongside photos and stories of its incredible history.
I use cookies to improve your experience on this website. OK!Read more