Why so impressive? Well, the entire little fishing town of Caernarfon is wrapped within the castle’s mighty stone walls.

The castle itself – positioned in front of the town, as if to defend it – is huge, impressively restored, and is resultantly a UNESCO World Heritage Site.

I could write an entire thesis on Caernarfon Castle – but that’s probably a bit too much for a little fansite like this one!

Instead, I thought I’d give you a top-ten rundown of the things which make Caernarfon so special – to encourage you to spend a day at this breathtaking destination.

10. Caernarfon is the mightiest of Edward I’s ‘Iron Ring’ of Castles

Edward I of England was ambitious, ferocious, and fixated on capturing independent Wales once-and-for-all. Although the Normans had attempted to capture of Caernarfon in the early 1100s, they’d failed and the town had remained safe in Welsh hands.

However, Edward I was highly ambitious, and desperately wished to conquer Wales. In 1282, he defeated and killed the last prince of Wales, Llywelyn ap Gruffud.

After that moment, Edward I set about consolidating his power by appropriating the Welsh people’s castles for his own use (as in Dolwyddelan); restoring old castles (as in Ruthin); and building new ones (as in Harlech and Caernarfon).

Caernarfon Castle was his most ambitious project. Harlech Castle and Beaumaris are undoubtedly magnificent works, but the elaborate town-walls, alongside the sheer size of Caernarfon, meant that it was Edward’s ‘definitive’ castle in a string of important works.

Click here to find out more about the fearsome attitude of Edward I.

9. Caernarfon was enshrined in Roman myth – and Edward I wanted to stamp his mark on ancient legends

Ancient myth had surrounded Caernarfon. The Roman legend of Macsen Wledig recounted the dreams of a Roman Emperor, travelling to a faraway land where he was greeted with a magnificent, multicoloured castle.

After his dream, he later sent messengers to scour the globe, to find again this magnificent spot of his dreams – identified in Caernarfon.

Edward I had illusions of grandeur, and the thought of building his chief Welsh residence on the spot enshrined in prestigious Roman mythology greatly appealed to him.

Inspired by the legends – and also by the Roman city of Constantinople, with its vast walls and colourful, octagonal towers – he chose to build a castle like no other had been made before, here in Caernarfon.

8. Caernarfon has an unusual ‘hourglass’ design

The design of Caernarfon Castle is a little unusual. The castle is aligned along the bay of the town, and is the walls of the castle surround massive central clearing – as the image below demonstrates.

Thick, reinforced walls surround this central courtyard on all sides. The walls extend back from the bay (which is at the front of the castle), cover the castle, and wrap around the old town of Caernarfon, too – meaning the whole area is securely held in these massive, stone structures.

The only entrance to the castle through the walls is via two massive gatehouses (see below).

7. Caernarfon Castle was a project of phenomenal expense and scale

Edward I spent a vast amount of money on building Caernarfon Castle. Records at his time show an expenditure of £22,000 – a huge sum, considering that the daily wage for a skilled craftsman back then would have been about 3 pence per day (and we’re talking old money, where there were 240 pence to one pound!).

To put it another way, £22k was more than the Treasury would have taken a year in tax!

Hundreds of tradesmen and equipment would have come vast distances to work on the castle. We know that timber and supplies were shipped in from Liverpool (using sea routes to Caernarfon) Anglesey and elsewhere in North Wales; and that labourers came from as far as London to work on the construction.

But it wasn’t just the ambition of Caernarfon which made it incredible. Caernarfon was built at a dizzying speed. Despite being built by hand, the castle appears to have been substantially completed in just five years to 1287.

6. The octagonal towers of Caernarfon give away its lofty status

Caernarfon Castle was meant for great things from the very moment of its birth: and its 12 magnificent, multi-angled towers indicate that it was a castle designed to be ‘a cut above’ the rest.

The style of these towers (some of which are octagonal, others hexagonal, and others are ten-sided) is significantly different to the gentler, more rounded profile of the towers on Edward I’s other ‘iron ring’ castles built in the same period – and these towers would have been much harder to build.

It’s thought that the design was deliberately chosen to evoke Constantinople (and the towers were said to have been constructed of multicoloured stone, too).

Some of the towers are phenomenally large – including the ten-sided Eagle Tower, which is more than 10m across at its base. The tower would have had more than three floors and numerous annexes; and was originally decorated with stone eagles (which have since weathered away!).

Legend has it that Edward of Caernarfon was born here in a small-ante room, but don’t believe it – it’s more likely he was born in the main rooms of the tower.

5. The huge gatehouses display the true might of the castle….

Caernarfon Castle is equipped with not one, but two mighty gatehouses – appropriately called the King’s Gate (which faced the town) and the Queen’s Gate (inevitably, the smaller of the two; which faces seaward).

The Queen’s Gate was never adequately completed, and was primarily intended for unloading supplies from ships.

The King’s Gate is an altogether different beast – probably ranking as one of the most fearsome castle gatehouses in the whole of the UK. It’s peppered with murder-holes for boiling oil and water; and would have contained more than four doors and five different portcullises to traverse.

A statue – presumed to be Edward I – even adorns the outer side of the gate, defying any potential intruder!

4. ….However, Caernarfon Castle was still attacked and overcome by Welsh rebels

As the official residence of Edward I, Caernarfon was an obvious site of discontent for Welsh rebels dissatisfied at English rule over the country. Consequently, it was the site of varied (and increasingly ferocious) attacks, which were designed to put Edward I’s English empire upon the back-foot.

The Welsh revolt of 1294 caught the English off-guard. The huge uprising was lead by Madog ap Llewlyn, and the whole of Wales was aflame with rebellion against English rule.

The Welsh destroyed many of Caernarfon’s town walls, and even managed to occupy the castle. Edward I quickly mustered troops and marched into Wales to quell the rebellion. In 1295, he recaptured Caernarfon, rebuilt many of the destroyed walls (at vast cost) and punished the Welsh for their insurrection.

1294 was the most significant rebellion in Caernarfon’s history, but it wasn’t the last. In 1403 and 1404, Owain Glyn Dwr attempted to besiege the castle, again in the name of Welsh nationalism (but this time backed by French forces): he was, however, unsuccessful.

During the British Civil War, the castle was garrisoned by the Royalists and survived three sieges, before it was captured by the Parliamentarians in 1648.

3. Caernarfon was the birthplace of the first Prince of Wales – a man who could ‘never speak a word of English’

As you can probably imagine, the Welsh people weren’t too thrilled with the English domination of their native country. However, the birth of Edward I’s son in the castle, in 1284, was a perfect opportunity for Edward I to ‘spin’ the story to his advantage.

The child – Edward of Caernarfon – was legitimately a Welshman, and was crowned ‘Prince of Wales’ in 1301 – demonstrably a Welshman, ruling over his own people.

This persuasive story-telling didn’t end there. It’s said that Edward I sold his son to the Welsh people as “A prince born of Wales, who could never speak a word of English”.

However, it was a bit of a crafty piece of propaganda – and it definitely didn’t mean that son Edward could only speak Welsh. The language of England’s nobility back then was still French, and so it’s almost no surprise that Edward of Caernarfon couldn’t speak English!

Edward of Caernarfon became King of England (Edward II of England) in 1307. His rule was, by many accounts, disastrous. He was deposed from power by his own wife, Isabella (the so-called ‘she wolf of France’), and met an unpleasant death.

2. Nowadays, it houses some unusual attractions – including the Museum of the Royal Welsh Fusiliers

With so many rooms, passageways and towers winding throughout Caernarfon Castle, the site has become a space suitable for hosting permanent exhibitions and museums of interest.

Within the Queen’s Tower, you’ll encounter the Museum of the Royal Welsh Fusiliers. The exhibition – included in the normal entrance price – houses uniform, guns, medals and memorabilia from the 300-year heritage of this proud and important Welsh regiment. The place is a little old-fashioned by modern museum standards – in particular, it’s probably too dry for children – but adults interested in more contemporary history should get something from it.

Two other towers also hold exhibitions. In the Eagle Tower, you’ll discover an interactive history of the castle; and there’s also a small exhibition in the Chamberlain Tower which includes the throne and paraphernalia from the investiture of Prince Charles of Wales (see next point!).

1. Even today, Princes are ‘crowned’ inside the castle

The UK still has a Prince of Wales – nowadays, it’s Prince Charles (who’s next-in-line for the throne). The ceremony of ‘investiture’ (effectively a ‘crowning’, or giving the Prince his formal title) takes place in Caernarfon Castle. Charles, Prince of Wales, received his title here in 1969; and Edward VIII was granted his title in 1911.

Although we can’t be sure, I’d anticipate that, on Charles becoming King of Great Britain, William would be ‘crowned’ Prince of Wales in Caernarfon.

Planning a Visit to Caernarfon Castle? My top tips!

Caernarfon receives more than 200,000 visitors every year and is filled with atmospheric passages and spiral staircase towers – amazing for kids, but less fun for those with disabilities.

The castle has a shop, and there are some decent pubs in the town for food.

If you’re looking for a place to stay nearby, be choosy – North Wales isn’t exactly famed for its hospitality. My recommendation for the best lodging in Caernarfon is the Black Boy Inn – built in 1522, within the Medieval city walls – it has very good reviews on TripAdvisor. (That’s an affiliate link to TripAdvisor).

My other recommendation would be to stay in spectacular Snowdonia National Park and visit Caernarfon as a day-trip. I’ve stayed in a great B&B above an Inn in Dolgellau, which is about an hour’s drive – and close to Harlech Castle, too. Visit that page on Harlech for more info on the accommodation.

Don’t stop exploring the Welsh castles of Edward I!

If you’ve enjoyed reading about Caernarfon, I think you’ll also enjoy reading more about Harlech Castle and Beaumaris Castle, also in North Wales. Both were built at the same time as Caernarfon – and are equally ambitious and impressive, but in very different ways.

Alternatively, why not discover more about the great man himself – Edward I? 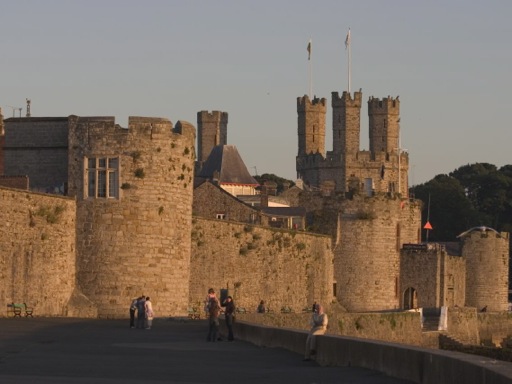 Caernarfon Castle is one of the top tourist attractions in Wales. Discover ten amazing facts about this incredible fortress.