How come? Well, Caerlaverock Castle’s shape is truly unique: it has a triangular layout with each point of the triangle capped with a turret (or two!).

To make it even more perfect, the entire castle is surrounded by an atmospheric green moat, giving the castle a story-book quality.

If all this wasn’t enough, its name has a particularly poetic meaning. ‘Caerlaverock’ means ‘fort of the skylark’ (from caer meaning fort; and the old English laewerce meaning lark).

A Tale of Two Castles: How Caerlaverock Came to Be Built

The history of Caerlaverock is really a ‘tale of two castles’.

This entire area stands on the frontier of Scotland and England – a turbulent spot, given the historical animosity between the two countries.

As with so many other modern day castles, the the fortifications at Caerlaverock were preceded by ancient Iron Age hill forts, as well as more modern Roman outposts. However, castles we’re concerned with were built by the Maxwell family, starting in the 1220s.

The Maxwells were Scottish lords – and were strangers to the area. However, in around 1220, the Scottish King Alexander II granted this patch of land to the family.

Why did they get such a windfall? Sir John Maxwell had been a trusted advisor to the King (his Chamberlain!), and King Alexander wanted reliable men to help him secure the borders between his Scottish Kingdom, and the English frontier.

Granted with the privilege of land, Sir John Maxwell began beavering away, building a from around 1220 onwards. However, this castle wasn’t the one you see today!

This castle – let’s call it ‘old Caerlaverock’ for convenience – was situated around 200m south of the spot where the present-day castle sits. However, this castle wasn’t used for long – for less than 50 years, before it was replaced by the ‘newer’ one.

It’s rather odd to have built one castle in 1220, and then build a new one, just 200 metres away, 50 years later. We don’t know exactly why this happened, but the best guess is that the ‘old’ castle frequently flooded.

Nowadays, only the worn foundations of the ‘old castle’ remain – and they’re hidden within a forest. A gentle walking trail that starts on the site of the ‘new’ castle can lead you to see them – and wonder about the mysteries that surround them.

The truly unique triangular design of Caerlaverock has proved a puzzle of academics. Just why build a castle in a triangle?!

This triangular castle – let’s call it ‘new Caerlaverock – was built from 1270. Some scholars have argued that the shape was due to the shape of the underlying rock, but this doesn’t quite explain the perfect symmetry of the castle, or the position of the moat.

The triangular design was also entirely unique within the UK, so it’s unlikely it was inspired by any other site. I should note, though, that it’s not the only example in the world of a triangular castle: the Castello di Sarzanello, which is North of Pisa, Italy, is somewhat similar, and built in 1320.

The triangular layout, however, is brilliantly defensive. The curtain-walls (which make up the triangular shape) double-back on themselves, which provides a formidable layer of defence.

At each corner of the triangle, there’s a tower, which acts as a look-out point and also maximises the strength of the construction. In addition, at the front point of the triangle, facing north towards Scotland, there’s a double-tower, which forms the gatehouse. This would have included the prestigious accommodations of the Maxwell family.

A Castle Battered By Many Sieges

Caerlaverock Castle survived some huge sieges during its time. One of the most significant sieges (and one of the best recorded military events in Medieval History) was the work of the English King Edward I in 1300.

Mighty King Edward I – nicknamed ‘long-shanks’ due to his huge height, or the ‘hammer of the Scots’ for his brutality – was intent on invading Scotland after having successfully overtaken Wales. In 1300 he unleashed a massive siege upon Caerlaverock Castle, intent of overcoming its defences – and making his way forward to capture Scotland.

Edward I besieged Caerlaverock in 1300, attacking with a phenomenal 87 knights, more than 3000 men, and using siege engines that had been transported across the country. The entire expedition was recorded in poetry – The Roll of Karlaverock – which is one of the best remaining primary sources describing Medieval castle sieges. Here’s a description from it:

“…So stoutly was the gate of the castle assailed by him [Edward I], that never did smith with his hammer strike his iron as he and his [troops] did there.

Notwithstanding, there were showered upon them [those Scottish men inside the castle] such huge stones, quarrels, and arrows, that with wounds and bruises they were so hurt and exhausted, that it was with very great difficulty they were able to retire.”

Despite Caerlaverock being extremely well defended, the castle fell in just two days. Some of the Scottish defenders were hung from the sides of the castle in punishment, and the castle fell to the hands of the English for 12 years. Edward I was successful here – but his long-term ambitious of overtaking Scotland were never fully realised.

This may have been the greatest siege to befall Caerlaverock Castle, but it certainly wasn’t the last. The castle was besieged again in 1356 (this time by Scottish forces, as the Maxwells were seen as being too close to the English); and then twice more by the English in 1544 and 1570 (as a result of ever-rumbling English/Scottish border battles).

The last huge siege came in 1640, when the Maxwell family sided with Charles I.

The castle was kept under siege for a mighty 13 weeks but, as before, the attackers won out. In punishment – and to ensure that the castle could not be used again for defence – the place was looted and vast damage was inflicted on the curtain walls at the back of the fortress, rendering it unfit for defence.

The castle was then pretty much abandoned from 1640 up to modern times – so the state you see today virtually identical to the the castle’s condition just after the 1640 ransacking.

Planning a Trip to Caerlaverock Castle

Nowadays, Caerlaverock Castle is an interesting, small site that’d take up a happy few hours of your holiday-time. Access is possible by public transport – getting a train to Dumfries, and then a bus, and then walking – but it’s much easier driving by car. There’s an adequate car-park, along with some basic catering facilities and a small gift-shop – it may be best to take a picnic.

It’s easy to wander around Caerlaverock Castle, and the site has ample green-space for relaxing in, as well as some guided walkways to the wooded area, where the ‘old’ castle ruins can be found.

There’re also models and demonstrations of old siege engines – and kids can even clamber over child-friendly ransacking tools within the carefully-themed play area!

If you’ve enjoyed reading about Caerlaverock Castle, I think you’d also be interested in reading more about other Scottish castles including tiny Duart Castle and a castle once home to Mary, Queen of Scots – Craigmillar Castle. 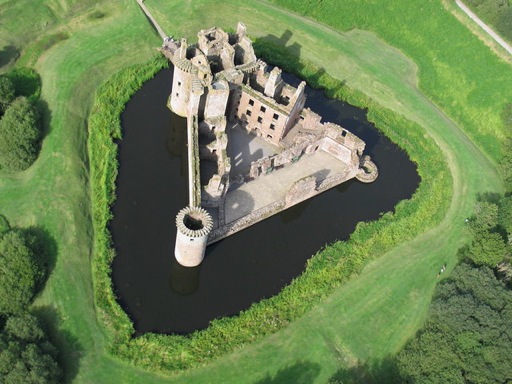 Caerlaverock Castle is an incredible, triangular Scottish castle that's quite unlike anything else in the world. Discover its secrets...