There’s a huge range of castles in Northern Ireland. These beautiful old buildings range from 800-year-old Medieval fortresses to modern stately homes and mansions, which were built in the style of old castles.

The foundations of the oldest castles in Northern Ireland were laid in the Iron Age. However, the majority of the greatest castles were the work of the Normans, who arrived in Ireland in 1169 after conquering England and Wales.

Carrickfergus Castle is an example of Norman endeavours, and is one of the most important Medieval castles in the whole of Ireland.

If you’re looking for rather romantic, jaw-dropping ruins, however, another Norman masterpiece – Dunluce Castle – will definitely sate your appetite.

Of course, don’t forget that it was only in 1921 that the island of Ireland was divided into two.

Northern Ireland became part of the UK, and the Republic of Ireland (Southern Ireland) became an autonomous state.

Evidently, during Medieval and Early Modern times, this division didn’t exist, and Ireland existed as a whole. This means that the history behind castles in Northern Ireland is a very similar story to the history of castles in the Irish Republic.

The Normans arrived in Ireland in 1169 and were determined to conquer the country, as they had captured England and Wales beforehand.

Of all their castles in Northern Ireland, Carrickfergus is undoubtedly one of the most impressive. The castle was built in the mid 1170s, mainly as a very visible demonstration of the Normans’ military might.

Carrickfergus Castle is situated in a superbly defensive position, as it looks eastward across the Belfast Lough and was originally surrounded by the sea on three sides (nowadays, some of the port-land is reclaimed from the sea, so the castle stands on a much smaller sea-front).

The castle is constructed from rough-hewn stone, and is imposing even by modern-day standards. At its heart lies an impressive Norman keep, which is protected by strong, defensive curtain walls which wrap tightly around it.

Carrickfergus certainly appears impressive, but its strength was partially for show. The Normans struggled to maintain control of much of Ulster, and it’s likely that this tremendous castle had a ‘bark worse than its bite’ – despite its fearsome looks, the reality is that Norman power in Northern Ireland was really quite weak for hundreds of years.

Over the centuries, the castle was used to hold prisoners, and was besieged numerous times (it’s effectively at the gateway to the north of Ireland, and so was attached by the Scots, Irish, English and French, too).

Nowadays, it’s rather besieged with tourists. It’s a very atmospheric little castle to explore, but the atmosphere is rather spoiled by larger-than-life waxworks, which demonstrate every part of Medieval life (everything from pouring boiling oil to, er, using the privy. Nice!).

If you’re planning on visiting Carrickfergus Castle, my recommendation is to stay in Belfast and tackle it as a day-trip – there’s a local rail station in easy walking distance of the castle, or driving is easy. It should be no more than a 30min trip.

Dunseverick Castle is an unusual pick within this selection of castles in Northern Ireland. Why did I choose it? After all, the castle ruins have almost completely disappeared, save for a few old dilapidated stone walls perched enigmatically atop a rugged cliff.

However, although there’s not much of Dunseverick Castle that’s still visible, the history behind the ruins is phenomenal. Dunseverick was founded well before the Norman invasion of Ireland – it was the site of a fort during the Iron Ages and was allegedly visited by St Patrick in AD500. It was attacked by Vikings in about AD900.

After the Norman invasion, the castle remained an important, fortified stronghold defending a key segment of the Irish coastline. During these years – from the late 1100s to the 1600s – the castle was held by the local McCain family, who fortified and further strengthened the site.

The ruined state of Dunseverick dates to 1642, when the Cromwellian campaign from England captured and destroyed the castle during their successful conquest of Ireland.

Presently, you can just wander up to the limited ruins of Dunseverick yourself – there’s no entry charge or formal visiting arrangement. It’s a common ‘stopping off’ point for tourists taking travelling along the Causeway Coast of Country Antrim, as it’s just a stone’s throw from the Giant’s Causeway.

Dunluce Castle: The Gem Amongst All Castles in Northern Ireland

Dunluce is the real gem amongst all the castles in Northern Ireland. It’s a surprisingly vast, grey stone ruin, tantalisingly perched on a basalt crag, which juts out into the choppy County Antrim sea.

It’s hard to convey just how impressive the setting of Dunluce Castle is. The edges of the crag are sheer cliff faces, which fall precipitously into the angry sea below.

On a grey day – and, let’s face it, Northern Ireland has a lot of grey days! – the different shades of grey ocean, grey ruins and grey sky are strikingly picturesque- although you’re suddenly living in an old black-and-white movie.

Access to the castle is across a bridge from the mainland cafe and coffee shop – creating a sense of isolation from the 21st century. The crag on which the castle stands would have been almost unassailable to any intruder, which is evidently the reason iron age fortifications were built on this spot, back before the times of the Vikings.

When the Normans arrived in Ireland in 1169, it’s easy to imagine them rubbing their hands with glee when they saw the strength and potential of this craggy corner.

They established the first buildings of Dunluce in the late 1100s, and the castle grew significantly over the next six hundred years – incorporating domestic dwellings as well as defensive ramparts. The castle remained in the hands of various Irish landlords until well into the c17th.

Interestingly, in 1588, the castle benefitted from the disaster of the Spanish Armada. Because the Spanish ships were fatefully blown off-course – saving the skins of the ill-prepared English – one of the treasure ships, the Girona, was wrecked upon the nearby Giant’s Causeway.

“Sorely Boy” McDonnell, the then-owner of the castle, is said to have scavenged through the wreckage of the ship and pulled out four grand cannons from the remains. It’s said that he built these cannons into the walls of Dunluce Castle, beefing up the defences of this already formidable fortress.

Nowadays, Dunluce is probably the most visited of all the castles in Northern Ireland. It remains in the care of the Northern Irish Ministry for the Environment and, although entrance is modestly charged, it’s open most of the year.

I’d definitely devote a generous chunk of time to visiting Dunluce Castle – a full morning or afternoon’s really required to really take in this very special little castle, and the dramatic surrounding coast-line.

If you’d like to stay somewhere truly special and you don’t mind a 25 mile drive to Dunluce, the Ardtara Country House is a nine room, gorgeously furnished country hotel that has outstanding reviews on TripAdvisor. Despite being decked in gorgeous antiques, the tone is friendly and informal, and the hotel is tucked deep within the Northern Irish countryside. Breakfasts are, by all accounts, fit for royalty. (Affiliate link to TripAdvisor site).

If you’re planning to venture across the border to the Republic of Ireland, why not stay in a castle while you’re there?!

Alternatively, do jump across to my page on the other castles in Ireland to find out more about other fantastic castles that you can discover around the country. 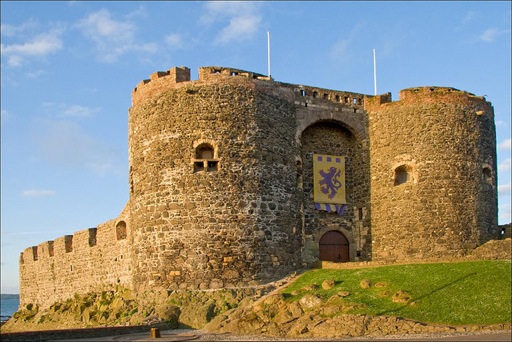 Discover some of the most incredible castles in Northern Ireland - stories of sea-splashed Medieval forts, and legends long forgotten....
I use cookies to improve your experience on this website. OK!Read more