Positioned near the Scottish border, Dunstanburgh is an impressive, sea-beaten ruin. It was built in the early 1300s for an endlessly ambitious man: Earl Thomas of Lancaster.

Nowadays, its ragged gatehouse is one of the most dramatic ruins in the whole of England.

Despite the once-mighty bulk of the gatehouse, there’s not much left of the rest of the castle.

Nonetheless, the rugged natural setting – with the the crashing waves and the lonely shoreline – means that Dunstanburgh feels really quite special indeed.

Its remote location has given birth to a number mysterious tales – of ghosts, secret passages, and the legend of the knight Sir Guy the Seeker.

Today, access to Dunstanburgh Castle is only by foot. You’ll need to walk from the nearby village of Craster, across moors and meadows, to reach the ruins.

The reason for this is because the coastline is a protected nesting habitat for sea-birds, and a habitat for rare flowers.

Even so, you might reasonably wonder why anyone would bother building a castle in such a remote location. There’s certainly not much around here that you might want to protect!

Well – like so many other Medieval castles – Dunstanburgh was built for defence.

But rather than defending a town or established settlement, it was really a fortified hidey-hole for a man who’d gotten himself into a bit of a political fix.

You see, the creator of this castle – Thomas, Earl of Lancaster – was a man who’d rather overreached himself. He needed to create somewhere as secure as possible, far away from the King of England.

And so he built this castle, from 1313 onwards. It was a great place to hide after a dastardly deed.

Building Dunstanburgh: A Castle For An Ambitious Earl

Thomas, Earl of Lancaster, was an ambitious soul.

Born in around 1278, he grew up alongside a young noble named Edward. Edward would later become King Edward II of England, and Earl Thomas would become one of the richest landowners in the whole of England.

The problem is that Earl Thomas was jealous and overreaching.

Edward, on the other hand, was weak and indecisive.

As King, Edward II developed an obsession (perhaps even a gay crush) upon a petulant courtier named Piers Gaveston.

Earl Thomas thought that Piers Gaveston’s influence was both toxic and unwelcome. And so – sensationally – he independently ordered the murder of the man.

Even in Medieval England, it was a sensationally violent act. It put Earl Thomas on a collision course with the King.

But, however distressed King Edward may have been at the death of his favourite Piers, he was impotent to seek revenge. Earl Thomas was one of the most wealthiest landowners in the whole of England, and it would be hard to hold him to account.

On Earl Thomas’ part, he understood that he’d dramatically overstepped the mark. He realised that he needed to keep a low profile from the king – for a little while at least.

As a result, he built himself a fortress in a remote spot. Dunstanburgh Castle was founded in about 1313. It was a safe haven, as far away from London as possible.

The Jewel of Dunstanburgh: The Great Gatehouse

The grand gatehouse was always the focal feature of Dunstanburgh Castle.

Today, its ruined shape is undeniably dramatic. Back in the Medieval period, it would have been a towering structure of almost unequalled ambition.

For Earl Thomas, the gatehouse would have combined strength with luxury.

On its ground floors, it functioned as a secure passageway into the vast inner courtyard of the castle. This passage would have been protected with thick wooden doors, and at least one portcullis.

The upper floors were luxury residences for the Earl and his entourage. They would have boasted high ceilings and grand fireplaces.

The gatehouse would have originally been about 80ft high – much taller than the remaining ruins might suggest.

After the death of Earl Thomas, the passageway through the gatehouse was blocked up. Each floor was then converted into accommodation – rather than the nobles on the upper floors being disturbed by the noise of those travelling into the castle below.

As a consequence, a second, less elaborate gatehouse was made alongside the original gatehouse. This new building served only to control access to the castle.

Today, little of the newer gatehouse survives. In addition, the passage through the original gatehouse has been unblocked.

Secret Passages and The Tale of ‘Sir Guy the Seeker’

Perhaps because of its remote and windswept location, there’s a whole host of legends attached to Dunstanburgh Castle.

One of the most persistent tales is that there’s a host of secret passageways which wind through the bedrock beneath the castle, and connect the fortress to nearby hamlets and villages.

Tales say that these passages emerge into via trap-doors into basements and barns, and allowed shadowy figures to move unnoticed between the ruined fortress, and the bedrooms of villagers.

Another famous legend is associated with Dunstanburgh – the tale of Sir Guy the Seeker.

The story of Sir Guy has been linked to a few different places in the UK, but it seems most closely linked to Dunstanburgh Castle. In 1808, Matthew Lewis wrote a poem connecting Sir Guy to the castle, and that association seems to have stuck.

The story goes like this. Many years ago, in times of chivalry, a lonely knight named Sir Guy was travelling along the Northumberland coast. The sun had set some hours ago, and the night had become thick and black.

From far away, the good knight heard a clap of thunder, and then the heavens opened, unleashing a phenomenal storm.

With little shelter in sight, the knight galloped forward, to try and find tall trees under which he could hide from the squall. But – as lightning cracked across the horizon – he noticed the grand silloutette of an abandoned castle: Dunstanburgh.

Sir Guy and a Monstrous Vision

Sir Guy galloped towards the castle. The closer he rode, the more clearly he realised that the castle stood tall upon a cliff high above him. With no path or staircase to reach the castle, he sought shelter in a cave beneath.

He entered the dark cave, removing his sodden cape and jacket. As his eyes grew accustomed to the gloom, he noticed a soft white light drifting towards him from a distance.

The light grew brighter and brighter, and a terrifying apparition swirled into view: a gruesome old man, dressed as a wizard. “Follow me, if you dare,” hissed the warlock, “for a beauty awaits you”.

Intrigued, the good knight followed the glowing shape of the wizard along innumerable dank corridors and up slippery staircases. Suddenly, the pair emerged in the heart of Dunstanburgh Castle.

The night was now pitch black, but still. Sir Guy glanced around him, and saw an army of sleeping knights and horsemen, resting on the ground.

At the centre of this slumbering army was a bewitchingly beautiful woman, sleeping upon a diamond plinth. The plinth itself was decorated with terrible images: of grasping skeletons and coiled snakes.

At one side of the maiden, there lay an old calling-horn. On the other other, lay a sword. “The maid’s fate depends on you,” snarled the white warlock. “Which should you choose to awaken her from slumber: horn or sword?”.

Sir Guy thought long and hard, pacing around the plinth. Eventually, he decided: and picked up the horn.

The moment he did, the warlock disappeared: and the slumbering army of knights awoke around him. They charged towards him, brandishing their swords: the men raising their arms to strike Sir Guy down.

But, when the swords hit Sir Guy, they didn’t slice through his flesh. Instead, he fell into a deep sleep: awaking, sodden, outside the cave beneath Dunstanburgh castle. The cruel voice of the wizard echoed through his hazy mind: “Shame on the coward who sounded a horn, when he might have unsheathed a sword.”

From then, its said, Sir Guy’s life became cursed. Obsessed with the bewitching beauty of the maid he had glimpsed, he was unable to leave Dunstanburgh until he could catch sight of her again.

He was never again to see the woman: and so haunts the castle to this day.

Visiting The Ruins of Dunstanburgh Today

Dunstanburgh is one of the most remote ruined castles in England, and so you’ll struggle to reach it without a car. Although the castle is in England, it’s close to the border with Scotland, and a significant proportion of visitors make the trip from Edinburgh.

The other major city nearby is Newcastle.

The castle is presently cared for by English Heritage. The surrounding lands is owned by the National Trust.

If you’re making a trip up, I would recommend combining the visit with a trip to Edinburgh Castle – a still-intact, central city fortress which provides an impressive contrast.

Murder, Romance, And Even More Secrets of Dunstanburgh Castle…

What horrible habits made Earl Thomas of Dunstanburgh so unpleasant?

Why did the male favourite of King Edward II meet a sticky end?

And what might you have found in the vast courtyard of Dunstanburgh Castle?

If you’d like to unearth more mysteries of Dunstanburgh Castle, you need my first print book, Exploring English Castles. 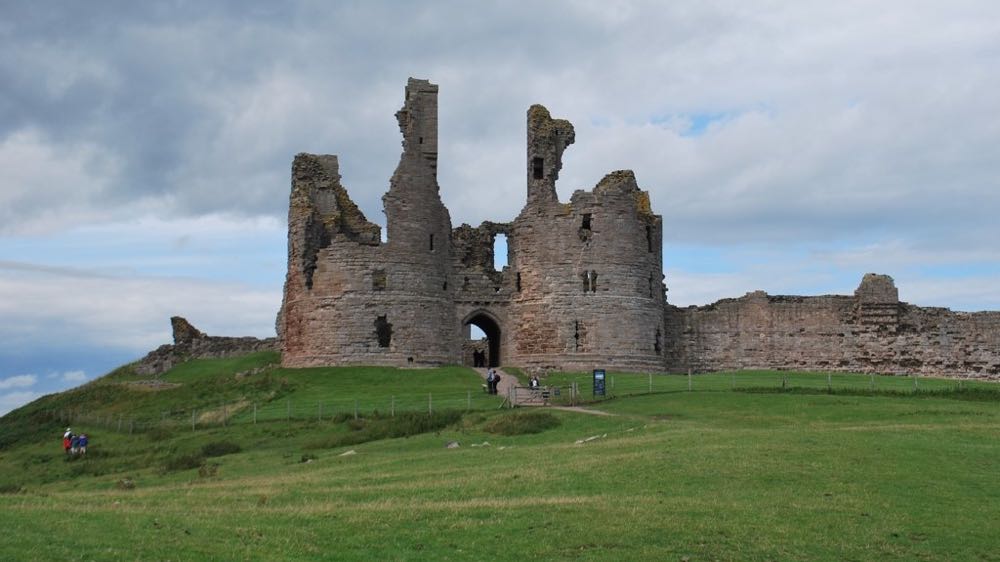 Dunstanburgh Castle and the Legend of Sir Guy the Seeker

Windswept and dramatic, Dunstanburgh Castle is one of England's most impressive castles. Discover the fortress, and the creepy legend of Sir Guy the Seeker.