Beeston Castle, in Cheshire, England, enjoys a truly remarkable view over the rolling Shire counties and the lush green hills of North Wales.

Many castles are built on rocky outcrops, but Beeston takes this to an extreme: it’s balanced upon a huge crag of sandstone that offers breathtaking vistas over (apparently) eight different counties.

Beeston was originally built as a bastion of power for the Earl Ranulf of Chester. As it’s a little-out-of the way, it was never a site of significant historical importance, but it’s steeped in persistent rumour – persuasive legends tell of the buried treasure of Richard II, who hid bags of gold somewhere on-site.

Today, English Heritage lavish the castle with the attention it deserves, and the site is open to the public.

I thought I’d give you a flavour of Beeston Castle by giving you four tall (but true!) tales from the castle’s history. So here we go..

4. Beeston Castle: Inspired by castles of the crusades

Beeston Castle was built in the 120s by Earl Ranulf of Chester – a gifted fighter, and a favourite of King John of England. Ranulf was an experienced soldier, and had battled within the Fifth Crusade, defending the Christian faith. Resultantly, as a reward for his loyal service, Earl Ranulf was gifted with the lands around Beeston Castle.

After King John’s death, the throne passed to his infant son Henry – and England was governed by Henry III’s crooked advisors. One of these advisors, Hubert de Burgh, was particularly corrupt. He began confiscating lands from English nobles to constrain their power – and Earl Ranulf feared that his property was next in line.

To protect his land, his family, and also to show his power, Earl Ranulf decided to build a mighty castle. And so Beeston was born.

The design of Beeston Castle, it’s alleged, was inspired by the fortresses and castles that Earl Ranulf had encountered during the crusades. Unusually – as was the ‘new’ fashion – the castle was equipped with no discernible castle Keep – instead, he built sizeable outer and inner baileys.

In addition to this unique design, the inner bailey of the castle was further fortified with a deep, nine metre, inner ditch – a unique additional line of defence, common within crusade fortresses in Eastern Europe. The original round, flanking towers of the castle would also have bourne similarities to crusader castles.

3. A Castle Further Fortified in Early Modern Times – but Destroyed During the Civil War

Beeston Castle enjoyed a relatively tranquil history up to the English Civil war. Its rural spot meant that it wasn’t too closely intertwined with national politics, or any form of local battle – most of these shenanigans were fought out in neighbouring Chester.

During Medieval times, the castle passed from hand to hand, and was fortified and strengthened by Henry III, and then by Edward I, who used the castle as a base before proceeding to Chester to engage in his successful capture of Wales.

After the 1400s, Beeston’s out-of-the-way location meant that the castle fell into ruinous slumber, unaffected by goings on elsewhere in England. The beginning of the English Civil war in the 1600s, however, changed all that.

The start of the Civil War transformed Beeston from a rural outpost to a strategic goldmine. This was as the castle, from its rural position, was in commanding distance of strategic sites which included Chester.

Beeston made a desirable base for armies seeking to capture some of England’s most important cities. Resultantly, in 1643 (when the Civil War began) the Parliamentary forces rushed to the castle to secure its defences and to station themselves against any Royalist attacks.

During the Civil War, control for the castle was hard-fought. Multiple battles meant that the castle passed from Parliamentarian hands, back to besieging Royalists, then back to the Parliamentarians, and then again to the Royalist cause.

Indeed, the Royalists held the castle until King Charles I had been captured (at which point, of course, the war was over). They then surrendered the castle, in a terrible state.

Sources tell us that the Royalist sympathisers last to leave the besieged castle were so desperate for food that they were forced to eat cats. Yowl.

When the castle finally surrendered, Parliament ordered a ‘slighting’ – as it had done for so many other British castles. This was an intentional destruction of the castle’s defensive outposts, to prevent any further uprising.

One rumour – which seemingly won’t go away – is that a vast buried treasure is hidden somewhere in Beeston Castle.

The story goes that Richard II secured bags and bags of gold somewhere in the castle – most likely in the deep well – and that these riches are still hidden to this day. (If you’re wondering why Richard II never collected the booty, he secured the bags, left for Ireland, and was promptly murdered in 1399).

In the age of the internet, speculation has become frantic, and over-eager whisperers have put insane values upon this hidden treasure of anything up to $1billion. Ridiculous! 🙂

The whole thing looks a bit suspect, especially because historical records show that Henry IV reclaimed gold from Beeston Castle during the c15th.

However, to be fair to this crazy story, there’s some truth in it: Richard II did commonly hide treasure in castle wells. In addition, Beeston Castle has well that’s thought to be more than 124m deep, and which has never been explored fully. Added to that, secret passageways and tunnels have been uncovered within the well, although no treasure has been uncovered as yet.

English Heritage – as a serious heritage organisation – are usually quite distasteful of wild myth and rumour. However, they’ve dedicated quite a bit of time to exploring this old legend, to the extent that they recently lowered cameras into the well to identify the blockages, and to try and see any changes in stone-work. So perhaps these myths aren’t as odd as they originally seem. . .

There’s another, even odder myth attached to Beeston Castle – a prophecy that, one day, the castle will save the whole of England. This prophecy evidently hasn’t come true as yet — but, who knows what could happen, eh?!

1. A Strange Tale of Follies and Kangaroos

Beeston Castle has also inspired some eccentric characters. The Victorian aristocrat John Tollemache purchased the castle and the surrounding estate in 1840, and was absolutely enchanted with the ruined majesty of the old castle. However, in extravagant Victorian times, simply restoring the old castle wasn’t enough for Tollemache.

Tollemache decided to build his own, mock-castle residence on a the hill opposite Beeston Castle. He called this folly ‘Peckforth Castle’, and spent £52,000 on its development – an absolute fortune, especially in those times. The two ‘castles’ were designed to complement each other – mimicking each other across the ravine – both sporting large sandstone towers, defensive crenellations, and deep, dry, rocky moats.

The whole concept rather has overtones of another massive folly built across the valley from an existing castle – Neuschwanstein Castle in Bavaria, Germany.

Anyway, nowadays, Peckforth Castle is a venue for hospitality, although it’s been badly damaged in recent years by fire.

Tollemache was evidently extremely eccentric, and his eccentricities continued with the annual Beeston Castle Fete, that was organised from the mid 1800s (and continues to this day). The fete was held in the castle, and was originally intended to raise money for neighbouring widows and children, as part of the Victorian fetish for the ‘deserving poor’.

However, truly bizarrely, one of the star attractions of the fair were imported kangaroos, brought to Britain to live (probably in considerable discomfort) within the castle ruins. Perhaps Tollemache wanted to achieve the ambience of some surreal Victorian fairytale — but I can’t imagine anything stranger.

The modern entrance building, which you’ll encounter as you enter Beeston Castle, was built in Victorian times, in a mock-Medieval style. The purpose of the building was for ticket-clipping Victorian tourists coming to the site – either to tour the castle, or to experience one of the legendary fairs.

If you’ve enjoyed this piece on Beeston Castle, I think you might also enjoy reading about the ruins of one of England’s most notorious old castles. Alternatively, I’ve written about lots of other castles in England. 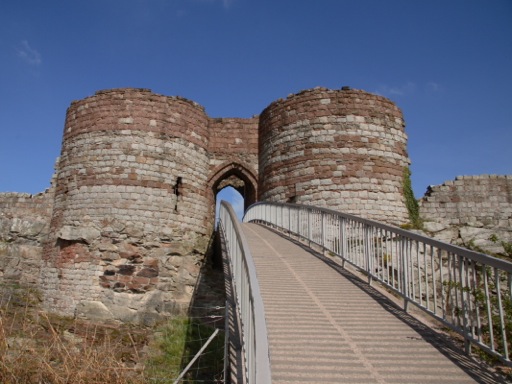 Beeston Castle is an incredible English castle, boasting brilliant views and the secret promise of buried treasure. Are you able to finally find it?