It was a hard-fought and blood-stained encounter. And, of course, the outcome of the battle would change Britain forever.

The 1066 Battle of Hastings is undoubtedly the most important battle ever fought on English soil.

It pitted the ‘Old English’ – the Anglo-Saxons, lead by King Harold – against the Norman invaders from the European continent.

I don’t think I’ll give away too much if I tell you that the Normans, lead by King William, were victorious.

The Norman victory changed England in every way imaginable. It brought us a new ruling dynasty, a new language, a new system of doing politics – and it imported castles, to boot!

I visited the site of the 1066 Battle of Hastings in the Summer of 2015. Logically – but confusingly, when written down – it’s adjacent to a town called Battle.

Today, Battle is a peaceful place of winding streets and cream-tea cafes. Back in 1066, it would be the site of fierce, blood-stained conflict.

A Clash of Kings: Why the 1066 Battle of Hastings Happened

To understand exactly why the 1066 Battle of Hastings took place, we need to understand the clash between William the Conqueror of Normandy, and King Harold of England.

Edward the Confessor, the old Anglo Saxon King of England, died in 1066. He didn’t have any children, so it was unclear who’d be next to the throne.

There were three men with a strong claim. Harold of Wessex – one of the wealthiest and most powerful residents of England – grabbed the throne as quickly as he could, and was crowned king.

William of Normandy was instantly angry at this. He argued that he’d been promised the throne by the old king, and Harold had agreed to this. He was enraged that Harold had gone back on his word. William, however, was in France – not England.

Over in Norway, another king – Harold Hardrada – claimed that he too was the rightful heir to the throne. He said that there was an old agreement that, if he outlived the old king, England would be possessed by Norway.

Of course, there was no way to resolve this peacefully. The three men decided to fight.

The Build-Up to the Battle of Hastings: the Bloodbath Battle of Stamford Bridge

During 1066, William of Normandy gathered men, troops, and boats. He stationed them on the French coastline, facing England. As soon as the weather was right, he was ready to attack.

While William bided his time, Harold Hardrada of Norway decided to act impetuously. He was buoyed by a truly unlikely ally.

The brother of King Harold of England – Tostig – had turned against his own sibling. Ouch! That must have been a long and painful rivalry.

Tostig and Hardrada worked together to gather troops. They sailed around 300 ships to the North of England, ready to capture England and defeat the king.

Of course, King Harold had to act – and quickly. He desperately gathered an army and marched as quickly as possible to the north.

On September 25, 1066, the English army fought the Norwegian vikings at Stamford Bridge. Quite unexpectedly, King Harold’s army won a decisive victory. Both Harold Hardrada and his brother Tostig were killed in the melee.

300 ships, filled with men, came to battle. Only 24 ships returned to Norway. It was a bloodbath.

The Eve of Battle: Wily William Arrives in England

Although King Harold of England had seen off one rival, he still had William of Normandy to contend with.

And William was particularly wily. Seeing Harold distracted in the North of England, he decided the time was ripe to set sail for the south coast.

William arrived on September 28 – three days after the Battle at Stamford Bridge. His men made camp, and built the first motte and bailey castles in England.

Realising that William had arrived, King Harold of England made his first big mistake. Instead of giving his army a chance to recover from the gruelling fight at Stamford Bridge, he became over-confident.

He decided to march them down the length of the country to meet William’s men, and to go into battle immediately.

Retrospectively, it seems like a disastrous decision. Harold’s troops would have been footsore and exhausted: there were probably about 8,000-10,000 men. By contrast, William probably had more men, all of whom had been resting for a few days.

It’s difficult to be sure exactly what happened during the day of the 1066 Battle of Hastings, as most of the records contradict each other.

We do know a few things for sure, however.

The English side, lead by Harold, started the battle at the top of a hill, and stuck tightly together. They raised their shields in-front of them, forming a barrier against arrows.

The Normans, by contrast, split into three separate flanks. Near the front of each flank was a battalion of archers, who fired arrows at their enemies.

Because the English men were protected by their shields, the arrows didn’t do much damage at all. In fact, the Normans made very little impact during the first few hours of the battle.

As the day progressed, they made an unsuccessful charge at the English side, panicked, and subsequently scattered.

The English side then chased after the fleeing Normans. William stood firm, however, and ordered his men to turn back and attack the charging, undisciplined English. The breaks in the line of shields meant that the Normans were able to kill many men.

Seeing the success of this trick, the Normans chose to repeat it – again and again. Each time, the calvary charged at the English forces, and then retreated. This lured the English to break rank – and, when they did, the Normans charged back and mowed them down.

The final throes of the battle, during the afternoon of that darkening October day, is infamous. It’s said that William’s archers were desperate for a resolution, and began to fire arrows high into the sky.

They hoped that the arrows would land over the barrier of English shields.

They struck lucky. It’s said that one arrow hit King Harold – directly in his eye (see the illustration above).

If it’s true, it would have been a terrible death. And, with the English king dead, his men were plunged into disarray. Many fled in terror. Those that stayed were mown down.

The battle was over, and the Normans had won.

The Aftermath of the Battle of Hastings: A Dash to Conquer England

William was a French speaking Norman aristrocrat, trying to seize control of a nation of rowdy Anglo-Saxons, who’d just seen their king killed.

As a result, he needed to assert control and dominance of England by taking control over London.

After capturing enough land surrounding the capital, William’s dominance began to look indisputable. As a result, he was crowned the first Norman King of England on Christmas Day, 1066.

Founding Battle Abbey: The Holy Remains of the 1066 Conflict

In 1070, William was reasonably secure in his new position as King of England.

The Pope, however, was rather aggrieved at the death and bloodshed wrought by the Normans during their conquest of England.

To do penance for the slaughter at Hastings, William built a vast, impressive abbey. (Some sources say that he pledged to build such a monastery before he even left France: atoning for his future sins on the battlefield).

As a result, a vast, ornate abbey was built on the alleged site of the 1066 Battle of Hastings.

The site of the High Altar was – apparently – the exact spot where the old King Harold had been killed.

In its early years, ‘Battle’ Abbey was one of the richest and most impressive religious houses in the whole of England.

However, it fell into disrepair – and what little remained was virtually destroyed by Henry VIII when he dissolved the monasteries.

Today, the remains of Battle Abbey lie scattered across the probable site of the 1066 Battle of Hastings. It’s open to visitors.

Perhaps unsurprisingly, given that the battle occurred around 950 years ago, there’s not much to see when it comes to battlefield remains. (There is, however brilliant, engaging, modern visitor centre, built by English Heritage).

By contrast, if you’d like to comb through the remains of the old monastery, there’s a lot to see. It’s both a sad and evocative sight – crumbling, but with old majesty.

If you’re interested in reading more about the conquest of England, you’ll enjoy my exploration of Lewes Castle – one of William I’s first built castles; or more information on motte and bailey fortresses. 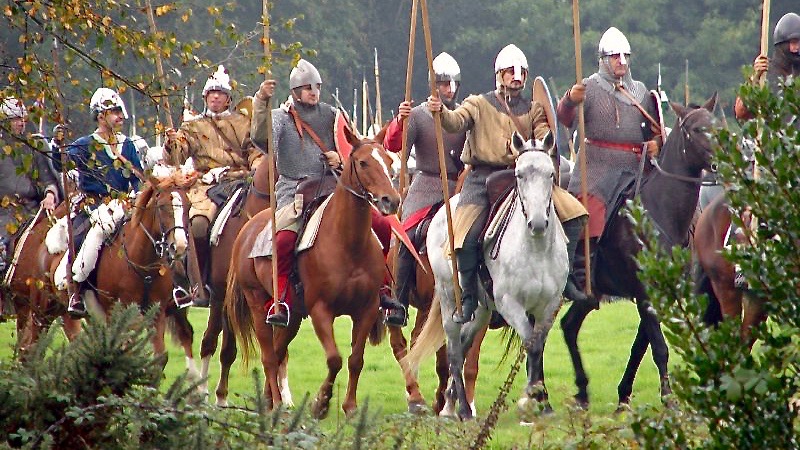 The 1066 Battle of Hastings: a Blood-Stained Melee which Formed Modern Britain

Discover the blood stained story of the 1066 Battle of Hastings, the most important fight to ever take place upon English soil.