The Alhambra, in Granada, Spain is one of the most evocative buildings I’ve ever visited in my life. It’s an absolute must-visit for any traveller to Andalucia – the biggest province in Southern Spain.

The Alhambra was an Arabic fortress built while the Moors (Muslims from North Africa) still laid claim to this part of Spain – back in the c13th or so.

“Alhambra” is a Spanish rendering of the Arabic words “qa’lat al-Hamra”, meaning “red castle”. The significance of the “red” part is easy to see, as it comes from the dusty red stone that was used to build the thick walls around the castle.

The entire site has got a magic feeling to it – a raise-the-hairs-on-the-back-of-your-neck kind of buzz that envelops you from the moment you begin the steep climb to its entrance-way.

The Alhambra rustles with incredible Arabic myths, and is filled with the whispers of ghosts from times gone by. It’s staggeringly beautiful, and feels like a creation from an old story-book, miraculously brought to life.

The setting is also like something from a picture postcard. The Alhambra stands proudly atop of one of the steep vantage-points of Granada – a hill called La Sabika.

The castle lurks behind blood-red boundary walls, and is framed against the snowy peaks of the Sierra Nevada mountain-range, some distance behind.

A potted history of the Alhambra

Due to the exceptional strategic potential of the Alhambra’s site, it’s been used as a location for a fortress since about the 9th century.

The most glorious part of the Alhambra’s history, though, was its time under the Nasrid emirs of the c13th-14th – when the Moors (Muslims from North Africa) still reigned in this part of Spain. Yusuf I and Mohammed V built the most beautiful sections of the complex, the Palacio Nazaries, intended for living and accommodation.

After the Spanish Christian monarchs defeated the Moors and captured Granada in 1492, they used the Alhambra as their own palace – adding sections and destroying others, including, terribly, a significant chunk of the Palacio Nazaries.

In addition to this, the entire site fell into significant disrepair in the 1700s, and was only placed under protection as an international monument in about 1870.

Happily, nowadays, the Alhambra is a well-cared for UNESCO World Heritage site.

The only issue which may rather spoil your enjoyment is that you might be accompanied by too many other tourists – there’s unfortunately no way around this, as a timed ticketing system means that the Alhambra is busy from the moment it opens to the second it shuts. Even with the crowds, though, you won’t fail to be swept up in the castle’s magic.

The Palacio Nazaries is the high-point of any visit to the Alhambra, and even to Spain! It’s definitely the most beautiful Muslim building in Europe, and is in remarkable condition, considering it was built in the c13th and has suffered years of abuse since.

On your visit to the Palacio, you’ll pass through numerous rooms, alcoves, and mesmeric cubby-holes. However, the palace consists of and distinct sections: which include the Mexuar connecting to the Patio del Cuatro Dorado; Palacio de Comares; and the Palacio de los Leones.

The Mexuar is the first hall you’ll enter, and sets you up for the majesty of the rest of the palace. It’s pierced by tall, wooden columns, and beautiful Arabic tiling lines the walls.

From this room, you’ll walk through the Patio del Cuatro Dorado – basically an airy little connecting way between the two palaces. Off to one side of it is the ‘Cuatro Dorado’, or ‘golden room’ itself – the name is slightly misleading, and more means ‘guilded room’, in reference to the hugely ornate stucco-work ceilings.

On walking through this connecting patrio, you’ll enter the Comares Palace. It’s a collection of majestic rooms, all collected around a central courtyard of the Myrtle-trees.

It was the most important palace in the Alhambra – location of the throne of Yusuf I. The magnificent Salon de Embajadores is the throne-room, and, if you look to the ceiling, you’ll be able to see ornate details in the woooden ceiling, which represent the seven Islamic heavens, through which a soul must ascend after death.

The final – and most magnificent stop – is the adjoining palace built by Mohammed V – the Palacio de los Leones (of the lions). This palace is set around the world-famous Patio de los Leones, a beautiful patio where water trickles from the mouths of 12 marble lions.

Unfortunately, this jaw-dropping sight tends to be somewhat ovverrun by tourists. Around this span out some heart-stoppingly beautiful rooms and chambers, including the Sala de Dos Hermanas, with its huge central dome and star-like constellations; and the Sala de los Reyes, wih padded, leather-lined ceilings.

Tired and feeling probably quite emotional after all that world-class sight-seeing, you’ll leave the Alhambra via the beautifully manicured Partal Gardens.

Other Attractions in the Alhambra: the Palace of Carlos V, the Alcazaba, and the Generalife

The magic of the Alhambra Granada Spain doesn’t begin and end in the Palacio Nazaries. There’s plenty more to bedazzle you.

The Palacio de Carlos V is a slightly weird, but nonetheless interesting, addition to the Alhambra complex. It was built as an add-on by the Spanish in 1532, and is a series of rooms around a vast, columned, circular courtyard.

It’s certainly impressive, although it’s rather overshadowed by other parts of the Alhambra. Inside, you’ll find a Museum of the Alhambra, which hosts a treasure-trove of historical nicknacks, and the Museum of Fine Arts (amusingly free for EU nationals only), which displays art and scuplture with a Granada theme.

The Alcazaba is the truest ‘castle-y bit’ of the Alhambra: a fortress with several towers.

Many of the buildings are sadly destroyed nowadays, but there are two beautiful towers to climb, including Torre de la Vela, the watchtower, which can be scaled for lovely, gusty views across the city of Granada.

The Alcazaba stood firm until 1492 when the Spanish forces conquered the Alhambra: that year, after capture, the flag of the ‘reconquista’ was flown, demonstrating that Spain had expelled the Moors from her lands.

And last, but by no means least, are the beautiful gardens of the Generalife.

Meaning ‘architects gardens’, the Generalife is an outstandlingly beautiful network of delicate water-fountains, carefully-clipped bushes and fragrant flowers, criss-crossed with gravel paths. It’s a lovely place to while away a relaxing few hours.

Planning Your Visit to the Alhambra

Behind the thick red walls that circle the Alhambra, there’s a huge amount to keep you occupied. Unfortunately, however, time’ll be short.

You’ll need to buy a ticket for either a morning or afternoon visit, and once your time’s up, you’re out. There are no tours (unless you want to book one): you can wander the grounds and buildings as you please during your half day, with one exception…

Entrance to the Palacio Nazaries is included in your ticket, but entrance is more tightly regulated – your ticket will have a half-hour timestamp upon it for your visiting slot.

This is because there’s only room for 300 people at a time in the palace. If you miss your slot, tough luck! Because of this, do plan your timings carefully and make sure you don’t miss out, as this Nasrid Palace is the best bit.

Tickets numbers are limited each day – and the Alhambra almost always sells out, especially in the summer. I strongly recommend you either start queuing early for your ticket, or book online.

There are many other phenomenal castles in Spain which are worth your undivided time and attention. I particularly recommend: 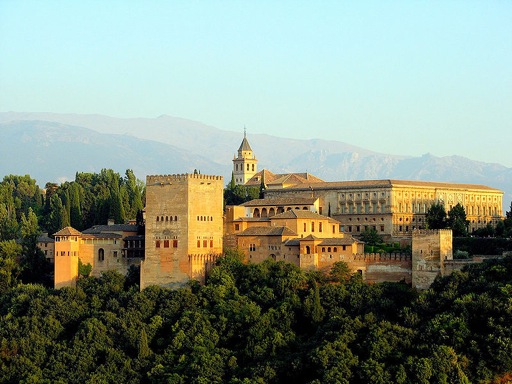 The Alhambra Granada Spain: History, Myths and Photos of This Incredible Fortress

The Alhambra Granada Spain is one of the most majestic fortresses in Europe. Discover its mysteries, old secrets, and check out amazing photos.
I use cookies to improve your experience on this website. OK!Read more