There are plenty of alcazar castle in Spain: magnificent Moorish fortresses, in sun-drenched lands.

Alcazar is a Spanish word deriving from the Arabic ‘al quasar’, meaning fortress or palace.

Spain has some truly magnificent examples of castle architecture – however, true alcazars are something a little different. Alcazars tend to be inspired by Moorish architecture, and were often built upon the remnants of 13th century Moorish fortresses.

These Alcazars originated from the time when Spain was occupied by Moors from North Africa – the period from around 711-1492.

There are some extremely famous examples of Alcazar castle in Spain. The Alcazar of Segovia is undoubtedly the most famous alcazar castle, as the fairytale turrets allegedly inspired the design of Disney themepark castles.

In addition, the Alcazar of Seville is one of Seville’s most noted tourist attractions. The alcazar is a beautiful, extensive complex, and a part-time residence of the Spanish royal family.

The Alcazar of Cordoba is less well-known but no less beautiful than the others. The alcazar was a home to the Spanish Inquisition, and was a favourite residence of King Ferdinand and Queen Isabella.

The fantasy alcazar of Segovia, a fairytale Spanish castle

There are few Spanish castles – well, to be fair, few castles in the whole world – with the fairytale charm of the Alcazar of Segovia. You’ll discover it within the province of Castile y Leon, in central Spain.

Apparently, the castle was the inspiration behind Cinderella’s Castle in Walt Disney World: whether or not this urban legend is true, the Alcazar is undeniably breathtaking.

The Alcazar enjoys a spectacularly defensive position, as it perches on top of a huge rocky outcrop that’s shaped rather like a ship’s bow. As a result, fortifications have existed here since before 1155, and the site was subject to a building frenzy during the 13th and 14th centuries, which shaped the majority of the rooms and fortifications that you’ll see today.

However, although it’s a ‘real’ castle, those picture-postcard perfect spires and turrets are something of a modern fantasy.

In 1862, a tremendous fire burned away much of the roof and existing turrets, and so they were rebuilt and remodelled by some Romantic architects. Taking inspiration from some of the Romantic castles being constructed in Germany at the time, they rather exaggerated the fairytale aspect!

On visiting the castle, you’ll be able to wander through nine, decorated period rooms, including a chapel and an armoury.

The most impressive of all chambers is the Sala de Las Pinas, where hundreds of ornate golden shields, shaped rather like pine-cones, hang evocatively from the ceiling.

This beautiful carving was completed in 1452, and is a lovely example of ornate Moorish design influencing Spanish castle architecture.

If you’re spending a day in Segovia (probably as a day-trip from Madrid), don’t forget to see the Cathedral and 782m Roman Aqueduct before you leave. The entire town is a real little treat for heritage lovers.

I visited the Alcazar de Segovia a few years ago. Read more about my trip. . .

The UNESCO-listed Alcazar castle of Seville

Three attractions in Seville make up a UNESCO World Heritage Site: the alcazar, the Seville Cathedral, and the Archivo de Indias (in the old lonja, or exchange house, which contains the archives of Spain’s old empire).

Each of the buildings is phenomenally impressive, but the Alcazar is, in my opinion, the most beautiful of the lot.

The Alcazar was born in 913 as a fort, and was added to and extended over time by its later Moorish rulers. In 1248, however, it fell to the Christians and became a home for Fernando III.

The Moorish architectural style was greatly admired by many Christian Spanish monarchs (ironically, given the Christian conquest) and many additions were made to the alcazar (castle), in a Muslim style. The most notable of these was Pedro I’s huge, and staggeringly impressive, Mudejar Palace – literally, the Moorish palace.

Nowadays, the Alcazar is a part-time residence for the present Spanish royal family, including King Juan Carlos. Even though only a few rooms are reserved for their usage, unfortunately, when they’re in, the complex becomes closed to tourists.

However, if the Royals aren’t in town, you can pay a little extra to tour their quarters – including the magnificent bedroom of Pedro I.

The Alcazar castle gardens are particularly beautiful, filled with ornate clipped hedges, trickling water, and fragrant, colourful flowers. It might surprise you to know that the gardens are actually a relatively modern addition to the palace – the majority were cultivated in the 17th century, and some are as recent as 20th century works.

In a cool grotto nestling beneath the gardens, just before the exit, you’ll encounter one final surprise: the spectacular, reflective, freshwater baths of Dona Maria de Padilla.

The Alcazar of Cordoba: once home to the Spanish Inquisition

The Mesquita is staggering building – a Moorish mosque converted into a Christian cathedral, and quite unlike anything you’ll see anywhere else in the world.

Although the Alcazar castle isn’t in the same league as its nearby rival, and isn’t quite as magic as its siblings in Seville or Segovia, it’s certainly worth a visit – particularly for its outstanding gardens.

The foundations for the Cordoba Alcazar were laid in Roman times – but it was the Moors who made the fortress the site it is today. In the 12th and 13th centuries, they dramatically enlarged the old fortress, adding the beautiful Caliph baths and adorning so many of the rooms with beautiful tile-work and plastering.

In 1236, however, the Spanish Christians ‘reconquered’ Cordoba, seizing it from the Moors. King Ferdinand III took hold of the Alcazar and made it his permanent residence.

Other kings and members of the Spanish nobility lived in the Alcazar castle over the years, and the castle was a site of fervent plotting, while the Spanish Christian monarchs tried to figure out a way to recapture Granada – the last stronghold of the Moors. In 1492, they finally succeeded – and expelled the Muslims from the country.

The military success served to stir Spain’s religious fervour. In Cordoba, from 1482, the Christian monarchs began the proceedings of ‘inquisition’ – to try, detain, torture and sentence people who they felt could compromise the Catholic faith.

The ‘inquisition’ extended to Muslims, Jews and also Protestants, and was used to consolidate the Catholic orthodoxy in Spain. The Alcazar of Cordoba was one of the first sites of the Inquisition – and its vaults, tunnels and cells were strengthened to take in so many prisoners.

Nowadays, there’s little evidence of the Inquisition in the alcazar castle. Indeed, many of the rooms and chambers are a little bare, and don’t reflect previous ornate decoration of the fortress.

Disappointingly, and somewhat amusingly, some of the most beautiful features of the alcazar have been removed over time – two huge waterwheels in the gardens were removed in c15th, as Queen Isabella complained that they kept her awake!

However, the modern-day gardens are more than worth a visit – they’re ornate, beautifully pruned, and full of cooling water features. You can also climb two towers – Torre de los Leones and Torre del Homenaje – to get a birds-eye perspective of the wonderful site. 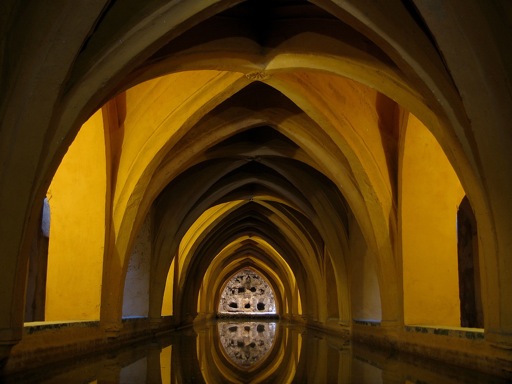 Alcazar Castle of Spain: Three of the Most Magical, Spanish-Moorish Fortresses