If you’re searching for Dracula’s Castle, you’ve come to the right place.

All are in deepest Transylvania, Romania.

Some of these castles are linked to Bram Stoker’s vampire – Dracula. And some are associated with an altogether more terrifying character – the ‘real life Dracula’, or Vlad the Impaler.

You see, Bram Stoker’s fictional vampire, Dracula, was based on a real person. He was Vlad the Impaler – or, to give him his full title, Vlad III, Son of the Dragon.

In the 1400s, Vlad was a ruler of modern-day Transylvania and a man with a tremendous appetite for cruelty. His blood-thirst acted as inspiration for Bram Stoker’s vampire named Dracula, in the novel written 450 years later.

Let’s find out a bit more about the real-life Dracula, and the castles he created – which served as inspiration for the vampire’s castle in Bram Stoker’s novel.

It’s often said that the truth is stranger than fiction. Indeed, according to some, Vlad the Impaler was a more of a gruesome monster than Dracula, who was just a literary creation.

If you’re at all squeamish, jump these next few paragraphs, ‘cos Vlad, Son of Dracul was a character of truly phenomenal cruelty.

It’s estimated by modern scholars that Vlad was responsible for the deaths of more than 80,000 individuals.

Vlad the Impaler was born Vlad III, Son of Dracul – Dracul being his father’s name, roughly translated to ‘dragon’.

In youth, he was denied his seat on his father’s throne of the state of Wallachia. As a result, he became a truly fearless warrior, destined to slaughter the families of all those who opposed his reign of the region.

To create panic and disarray within his enemies, Vlad embarked on gruesome psychological warfare. Most famously, he impaled his victims on sharp spikes.

Whole towns of people were impaled in forests of spikes, as a message to would-be attackers.

He was a sadistic man. Sometimes, his victims would be hoisted to the top of the spike, impaled, and left to die slowly, gravity dragging them down the pole. They’d then be left to rot, as a warning.

This wasn’t enough for Vlad, though. He reportedly also enjoyed burning victims alive; gouging out eyes; and chopping off limbs. He saved particular cruelty and brutality for females – committing unspeakable acts to pregnant women.

These are all facts we know from historical sources, but there are more gruesome rumours that abound.

Apparently, Vlad used to drink the blood of his victims; feast next to the remains of impaled corpses; or even cook and eat the flesh of those he killed. It’s easy to see the inspiration behind the Dracula novella.

Of course, though, there are two sides to every story. Some modern historians don’t doubt the trail of death and destruction wrought by Vlad, but choose to interpret it in a less sensational fashion.

Remember that Vlad was a figure of Medieval times – which were far crueller and more violent than modern life. Back then, a common punishment was hanging – which was probably just as gory and cruel as impaling someone.

Vlad also succeeded where others failed – he created order and justice in a country which was previously lawless.

Perhaps, some historians argue, his strong-arm tactics were actually justified – and you might be surprised to see that modern day Romanians look to him as some kind of a hero.

Vlad the Impaler may have been blood-thirsty enough to inspire the creation of Dracula the Vampire – but not everyone sees him as a real monster.

When Bram Stoker’s novel ‘Dracula’ was unleashed upon the world in the 1890s, it was an almost instant sensation. He wasn’t the first author to write about vampires, though.

However his novel was an incredible example of new gothic style. It was filled with macabre images, seething tension and even sexuality. It quickly became a sensation, and its influence persists to today.

Bram Stoker openly acknowledged that the ‘immortal’ character of Vlad the Impaler inspired his creation of Dracula the Vampire.

His novel was also inspired by the Transylvanian folktales of ‘strigoi’ – ghosts who rise at night to wander the countryside, and suck the blood of their victims.

Bram Stoker travelled to Romania to uncover ideas and inspiration to strengthen his novel. We know that he would have at least seen the photographs of many Romanian castles. But modern day scholars can find no evidence of one particular castle that acted as inspiration for his work.

All in all, we have to assume that Dracula’s Castle, as featured in Bram Stoker’s novel, is a work of fiction. It’s probably a patch work of lots of little castles, woven together.

In fact, to quote the novel, “I was not able to light on any map or work giving the exact locality of the Castle Dracula”. The castle is a place of myth and legend.

Could These Have Been Dracula’s Castle? A Collection of Castles All Linked To Dracula

The truth is that there’s no single ‘Dracula’s castle’ somewhere in the world. Instead, there are a multitude of spooky castles in Transylvania connected to the Dracula legends.

All these castles were connected to Vlad the Impaler, the ‘real life Dracula’; and all of them acted as inspiration for the spooky castle in Bram Stoker’s novel.

I’m going to uncover them all: and give them an ‘authentic Dracula rating’ to boot.

Bran Castle is commonly thought by tourists around the world to be ‘Dracula’s castle’. And from a distance, it looks a great deal like the castle described in Bram Stoker’s novel: it’s a terrifying silhouette, perched on a cliff-face near the Bran Pass.

Unfortunately, the resemblance is only skin deep. The castle doesn’t really have any connection to Vlad the Impaler: there’s no strong evidence to say he stayed here, although he did fight battles in the region. There’s also no evidence Bram Stoker ever visited – or had even ever seen – the castle.

Today, the closest you’ll get to Dracula here is the rather tacky gift-stands.

Authentic Dracula Rating: 5/10 – All looks but no substance.
Click here to find out more about Bran Castle . . .

Poenari Castle is the work of Vlad the Impaler – so, in a sense, it really is Dracula’s castle. There was a fortress on this high, mountainous lookout since early Medieval times; but Vlad the Impaler decided that it needed to be strengthened.

The legend goes that Vlad enslaved the inhabitants of nearby Tirgoviste and forced them to rebuild the castle – offering them their freedom if they could complete the structure in three years of work.

The legend goes that, although the enslaved kept their side of the bargain, Vlad the Impaler didn’t. After the years of backbreaking work, he had most of the unfortunates executed.

Today, Poenari Castle is the absolute opposite of Bran Castle – a ruined, mighty fortress that seldom sees that many tourists. Views from the citadel are outstanding – and you can be assured that the real life Dracula really did stay here.

The appearance alone of Hunyad Castle is enough to strike fear into most people’s hearts: I literally don’t think I’ve seen such a terrifying structure in my life.

The castle is also intimately linked to Vlad the Impaler, our real life Dracula. Later in life, when Vlad’s power waned, he was held prisoner in the dungeons of the castle. Legend goes that the imprisonment drove him further towards insanity: as he tortured rats, insects and animals, in preparation for his release.

It doesn’t appear that Bram Stoker ever visited the castle, but I can’t help but think that the writer may have got inspiration from the terrifying appearance of this place. 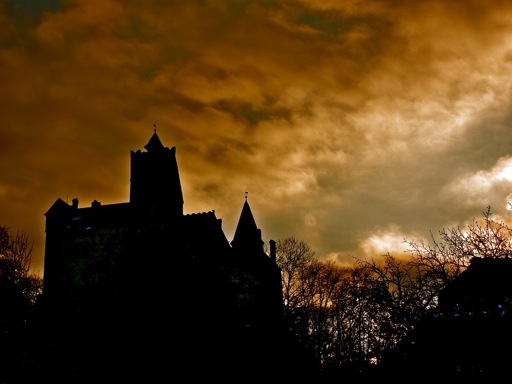 Searching for Dracula's Castle? Discover grisly tales of the castles in Romania which inspired the legend of this blood-thirsty vampire.
I use cookies to improve your experience on this website. OK!Read more