I’ve received many emails asking for help to find the perfect castle hotel in Ireland.

As a result, I’ve written this little page to highlight some of the most popular castle hotels in Ireland. All the below receive consistently good reviews from past visitors, and on sites such as TripAdvisor.

If you’ve recently stayed in a castle hotel in Ireland and have a recommendation (or, if you own a hotel yourself!) do drop me a line – you’ll see contact link at the bottom of the page.

If you’re an animal lover, 4* Ballyseede Castle, in the West of Ireland, may be the perfect choice. This characterful manor house is populated by two cheerful Irish Wolfhounds, one of which is named Mr. Higgins, and the other of whom is – even more eccentrically – named Einstein.

There are horses and donkeys in the adjacent fields, and ample opportunities for fishing and horse-riding.

There’s a good few years of history behind the hotel, too. The ‘castle’ is a 1590’s manor-house of the Fitzgerald family, a famously cantankerous blood-line who refused to swear allegiance to the English crown. Their little fortress was modernised in the late c20th to become the luxury hotel which you see today.

There’s a certain eccentric character which runs though the hotel, which is more than reflected by the resident ghost.

The basement is said to contain a spook named Hilda, who pops out on the 24th of March to scare the locals, before going back into hiding for another 365 days of the year. (I’m not actually making this up, either).

The property enjoys consistently excellent reviews on TripAdvisor and is more affordably priced than most of the other Ireland castle hotels which I’ve listed upon this page.

Read more traveller’s reviews of Ballyseede Castle – and book with the best rates. . .

A 5* Luxury Castle Hotel in Ireland: Ashford Castle in Cong

Ashford Castle is a 5*, luxury castle property with a history of welcoming truly distinguished guests through its doors. George V (King of Britain, 1865-1936), Oscar Wilde, John Lennon and George Harrison are just some of its remarkable residents over the years; you’ll notice that there’s a helipad to welcome more modern celebrities.

The foundations of the castle were laid back in 1228, but the majority of the present day castle was the work of the Guinness family (yes, the brewers), from 1852 onwards.

The vast, neo-gothic Victorian wings house the majority of the modern bedrooms and function rooms; the restaurant is named after King George himself.

The Guinness family were keen nature-lovers, and acquired vast amounts of land around the castle to adapt into lakes for fishing – and grounds for hunting. Nowadays, the 350 acres are filled with a nine-hole golf course; numerous woodland trails; and opportunities for fishing in the salmon-flecked river.

Most recently, Ashford Castle has been a victim of the precipitous crash in the Irish economy. Purchased in the boom-years, its owners were declared bankrupt in late 2011 – happily, though, Ashford remains an operating castle hotel.

The castle receives excellent reviews on TripAdvisor, although some reviewers do mention issues with maintenance. A large refurb is underway, I’ve heard.

Dromoland Castle is a 5* luxury castle hotel in Ireland. It’s about 20km from Limerick – and a stone’s throw from Shannon Airport, if you’re arriving from the States.

The modern-day ‘castle’ was built on the site of a c16th Tower House, which was home to more than eight generations of the O’Brien family. During the c18th, the house was nothing more than a two-storey house of ten rooms; however, in 1822, the shape of today’s castle began to form.

The then-owner, St Edward O’Brien, sought to build an incredible, neo-gothic country home, with crenellated battlements and huge turrets. Today, this Irish castle hotel is capped with the arms of the O’Brien family, surrounded by four pointed turrets.

The modern owners of the castle are keen to lay-on a real experience, so there’re opportunities for pony-trap rides around the 350 acre estate – or falconry lessons within the onsite-school.

You’ll discover an extensive, modern fitness suite in a recently-build outbuilding; alongside tended flower, fruit and herb-gardens, which are designed to be ambled through.

The castle receives consistently good reviews on TripAdvisor, and many travellers perceive Dromoland to vy with Ashburn for the accolade of being the greatest castle hotel in Ireland.

An Irish Castle Hotel on the Outskirts of Dublin: Clontarf Castle

Clontarf Castle is a real grande dame on the Irish castle hotel scene – seen by some as the castle hotel in Ireland. Its convenient location on the outskirts of Dublin has made it a real draw for thousands of international visitors.

There’s been a castle at Clontarf since about 1172; and the fortification has seen a great deal of action during the years. It was notably seized from Irish hands during the Cromwellian reconquest of Ireland, passing onto the Vernon family, who held the property until the mid c20th.

Today’s castle, although on the site of the old Clontarf fortifications, is much more modern. The manor was built in 1837, and most of the guest rooms are housed in c20th purpose-built wings.

Although this isn’t perhaps the olde-worlde experience that some guests might be hoping for, it offers a level of warmth and comfort that you really won’t experience in more ‘authentic’ castles (trust me on this one).

Clontarf is a convenient choose for visitors to Dublin who’re looking to enjoy a a stay in a castle hotel in Ireland during a short break or weekend trip. Again, the property enjoys excellent reviews on TripAdvisor and is officially rated at 4*.

If you’re visiting Ireland, don’t miss my pick of the greatest castles in Dublin. But equally there are many other sea-worn castles to explore, studded around Ireland.

Plus, if you feel like crossing the border to Northern Ireland, there are plenty of amazing Northern Irish castles to check out. 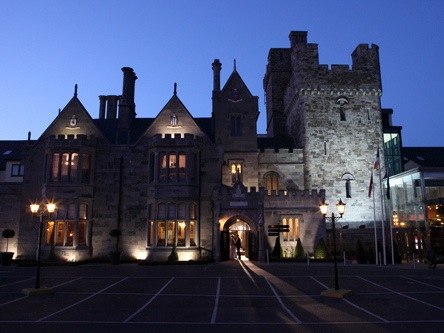 Searching for the greatest castle hotel in Ireland? Discover some of the grandest, most beautiful, and most luxurious castle hotels in Ireland.