Neuschwanstein Castle, in Germany, is one of the greatest castles in Europe – and one of the world’s foremost tourist attractions.

Neuschwanstein was designed to be a hideaway for this reclusive king, as well as a palace evoking Medieval myth and fantasy.

The story behind this fairytale castle is evocative in itself. King Ludwig was forced onto the throne before he was 20, and, in just two years, suffered a crushing military defeat which was a huge blow to Bavaria.

The young King appeared to also have a rather troubled personality. So, rather than tackle his disappointments and failures head-on, he immersed himself a fantasy-world of building fairytale castles.

Neuschwanstein Castle, in Germany, is the ultimate result of his obsessions (or, some would say, his gathering insanity). It’s a phenomenal site, as the majestic exterior is more-than-matched by the decadent interior decor.

A Castle Built Upon Castle Remains— And In Sight of Another

However, the dramatic rocky cliff-ledge on which Neuschwanstein stands was once the spot of two Medieval castles – and their remains were blown up to make way for Neuschwanstein.

However, this cliff-top creates more than its fair share of headaches for modern maintenance-men. Natural erosion and weathering is destabilising the bedrock beneath the castle, a potential ecological time-bomb. This is being managed by netting the cliffs, and searching for engineering solutions.

This perhaps explains his adult fascination with Medieval folklore and history – he had been a real little prince, who had grown up in a real little castle.

Indeed, in adult life, he maintained a bedroom in Hohenschwangau which was equipped with a telescope. From his spot, he could peer across the valley and watch Neuschwanstein Castle being built.

Neuschwanstein: A Refuge for King Ludwig, An Eccentric and Troubled Individual

Every part of Neuschwanstein reflects the troubled and eccentric life of King Ludwig. It reflects his obsessions with the work of Wagner, his preoccupations with the noble lives of Medieval royalty, and his desire to retreat into a solitary world of fantasy beliefs.

Central to the castle is theatre, opera, and the works of Wagner. King Ludwig was entirely obsessed with Wagner, who was a close friend (on Wagner’s death, Ludwig was said to be devastated).

Resultantly, Ludwig intended to fashion the castle to be a place for the performance and appreciation of Wagner’s works.

The interior walls of the castle are adorned with murals which depict the legends behind Wager’s operas, and the lead architect for Neuschwanstein was even a stage designer, named Christian Jank.

Other mythology was important for Ludwig II of Bavaria. Two people – the poet Tannhauser, and the Grail King – are depicted throughout the castle.

The Grail King was a Medieval legend – a pauper who had risen to King because of his pure soul. He achieved success from winning inner battles to overcome sin.

Why the obsession with the Grail King? Well, if you wanted to psychoanalyse Ludwig in present-day terms, you’d focus on his diaries.

The diaries describe Ludwig’s inner battles to repress his homosexuality (which was illegal and probably considered immoral back then). His obsession with the Grail King then becomes more understandable.

Another phenomenal part of the interior of Neuschwanstein Castle in Germany is the grotto – a Disney-esque passageway of artificial rocks and flowing waterfalls, running along a corridor of the castle.

This section – which is a little like a theme-park interior! – evokes the Medieval mythology of the poet Tannhauser.

The emblem of the swan was another important image in the construction of the castle, and an entire corner of the castle’s living room is dedicated this magestic bird.

The swan represents not just purity, as in Christian literature, but also the character of the Swan Knight, who was featured in Wagner’s opera Lohengrin.

Neuschwanstein essentially means “New Swan Stone”, and Ludwig is still thought of today as being “The Swan Prince” or “The Swan King”.

There’s been a lot written about Neuschwanstein Castle in Germany, and not all of it’s entirely accurate. Let’s sort some of the fact from the fiction–

An unfinished masterpiece – with bare brick rooms to this day

Neuschwanstein Castle was never finished. Construction began in around 1869, but the project was slow-moving from the start – it was originally planned to take just three years until it Ludwig could move in, but this quickly slipped to ten, then 14, then 16….

In addition, by the late 1800s, King Ludwig’s castle-building projects were also running into phenomenal debt, accounting for a personal debt, in 1885, of around 14m marks. King Ludwig, however, was too stubborn (or too mad) to acknowledge these financial difficulties.

In addition to these problems, the castle had been designed a shrine to Wagner – and a grand location for concerts of his works. Wagner died, however, in 1883, never having set foot in the site, much to the dismay of a heartbroken King Ludwig.

In 1886, King Ludwig was declared insane.

Whether or not he was truly mad is an issue for debate: it suited his court to try and depose him on grounds of mental health. After his diagnosis, he was forced to leave the castle, and, three days later, he died in extremely suspicious circumstances.

When he died in 1886, King Ludwig would only have ever seen Neuschwanstein as a building-site.

Of the 200+ planned rooms, only 14 were finished (and much of the castle remains incomplete to this day – the second-floor rooms are inaccessible to the public because they’re just bare brick).

Most notably, a huge Keep was planned for the centre of the site, but, for reasons of time and finances, it has never been completed. Its foundations can still be sighted today within the castle’s Upper Courtyard.

Partially because of the vast debts incurred, just weeks after King Ludwig’s death, his family opened the castle to tourists.

Building-work to complete the remainder of the exterior continued as these first tourists flocked in, and, since that time, Neuschwanstein has blossomed on the world stage as a major tourist attraction.

Planning a Visit to Neuschwanstein Castle: Tips and Tricks

Planning on visiting Neuschwanstein? Neuschwanstein is in Germany’s southern province of Bavaria, and attracts around 1.3m tourists every year.

Although the sheer numbers of other visitors could be overwhelming, remember that this is Germany that we’re talking about – the tourist experience is slick, clean, efficient and well managed, if rather expensive.

The castle tends to be very busy during July and August. If you’re trying to figure out the best weather for a trip to Neuschwanstein, I’d probably recommend September and October, when the temperature is mild and there’s not much rain.

Be warned that it’s extremely cold and snowy in the winter – most days, the temperature doesn’t rise much above freezing, and there’s lots of snow.

Once you’ve figured when you’re going to go, the next part is figuring where to stay. The main tourist stopping point for visiting the the castle is from a hotel in Munich, and from there are frequent trains, which take about 2.5hours to reach Fussen. From Fussen, it’s a short bus-ride.

No matter what time you visit, access to Neuschwanstein is via timed tour. You can’t choose your tour-time – it’s preassigned when purchasing tickets – and you strictly can’t wander from the tour.

Despite this, the tour guides are reasonably knowledgable and the tour gives an adequate amount of time inside the castle. Note that filming or photographing the castle interior is very strictly prohibited – which is why you only see external photos on this page.

I’m delighted to give you advice and help on planning a trip to Neuschwanstein – do read more about my guide below.

If you enjoyed this page, you’ll love my full travel guide to Neuschwanstein Castle!

If you’ve found this page useful, I’m sure you’ll find my Book – Neuschwanstein Castle: An Exploring Castles Travel Guide – to be a great companion for your visit.

The guide is written by me, Edd, and is fully updated for 2016/7. It’s crammed full of useful information and money saving tips to transform any visit to Neuschwanstein.

I promise you that it’ll save you time – and money too.

You can pick up the printed book – or a digital version which works on Kindle – via Amazon. 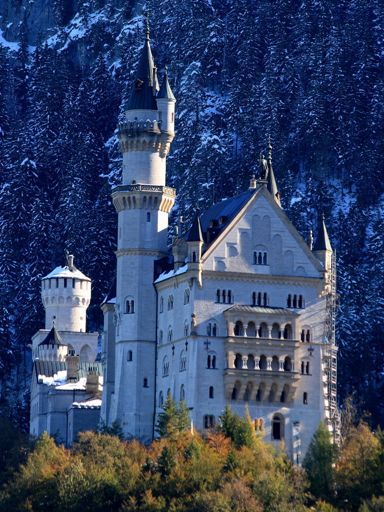 Neuschwanstein Castle Germany – The Most Famous Castle in the World

Neuschwanstein Castle Germany, is one of the greatest castles in Europe - and the world! Discover its secrets - and tales of 'Mad' King Ludwig...
Loading Comments...