Burg Eltz (Eltz Castle) sure looks something like a fairytale. This atmospheric German castle is located in a rural, wooded dell; not too far from the winding river Rhine.

I visited Burg Eltz in 2012; and it was a really memorable experience.

Enchantingly, the best way to reach the castle is by walking for 45 minutes through a dark green pine-forest. Suddenly, seemingly out of nowhere, you turn a corner and Eltz Castle appears in front of you, like some odd mirage or fantastical fairytale. It’s a very special experience.

In common with many other German castles, Burg Eltz has been designed more for looks than for defence – it’s really a grand rural home, rather than an old Medieval fortress. However, its insides offer an interesting glimpse into the domestic lives of early Modern German nobility; and the outside of the castle is jaw-droppingly impressive.

A Medieval Spot, Chosen for Defence

It’s somewhat difficult to gauge from my photos, but Eltz Castle is situated within a small, wooded valley; and stands in the middle of the basin, perched upon a rocky crag. The river Eltz almost entirely loops around the crag; making it a brilliantly defensive spot.

It’s easy to see that this was a perfect spot upon which to construct a castle. But Eltz Castle was well-placed for economic reasons, as well as geographic. The confluence of the Rhine and Mosel rivers formed an important trade-route back in Medieval times.

Castles were used to protect trade routes; but, in addition, they could be used by nobles as a base to collect taxes and tithes from passing merchants. Because of this, the first foundations of the Burg were laid in about 1157. These first structures became the Platteltz – a large, Medieval castle-keep, which nowadays is merged into the buildings at the back of the castle.

Burg Eltz: Three Castles in One

From small foundations, mighty castles are built – and it might surprise you to discover that Eltz Castle wasn’t designed or built as one complete structure. Indeed, Burg Eltz is actually three castles in one.

How come? Constructing a Medieval castle was a significant financial commitment, and so three different branches of the Eltz family built entirely separate structures on the site of today’s castle.

There were three different sides of the clan – the Kempenich (‘The House of the Golden Lion’), the Rubenach (‘The House of the Silver Lion’) and the ‘The House of the Buffalo Horns’, who each built their own fortified living-quarters. These separate buildings co-existed peacefully on the rocky crag; with their residents sharing a central well and courtyard.

Each family branch built different buildings during different architectural periods. For example, the Rubenach buildings (some of which surround the courtyard today) were late-Gothic in style – placing emphasis on light and height. By contrast, the 1600s Kempenich buildings display early-modern complexity, with octagonal foundations and grand timber work towers.

Presently, Eltz Castle is privately owned; and has been held by the Eltz family for more than 800 years. The owner-in-chief is Dr Karl Graf; who’s in the 33rd generation of the Eltz clan.

The modern-day owners are keen to emphasise that the castle’s recent restoration has been reasonably authentic. Back in the late 1800s, the Romantic style of restoration rather over-exaggerated the fairytale aspects of many other castles, rather mutilating their true heritage. In contrast, Burg Eltz was renovated and restored in a more sympathetic manner.

My impression is that the restoration of the castle smoothed some the disparate architectural styles, creating a castle that looked more ordered and unified – something built as a whole, rather than as an amalgamation of three parts.

The Innards of the Castle: The Lives of German Nobility Past

Nowadays, the only way to see the innards of Burg Eltz is via a 45min guided tour – happily, there are a couple of English tours every day. The one downside of the touring mechanism is that photography of the rooms and chambers is strictly forbidden (you’ll have probably spotted this already, as I’ve only included exterior photos on this page).

The insides of the Eltz Castle are an impressive (and slightly eclectic) combination of authentic Medieval furniture and more modern additions. There’re almost 80 different rooms within the castle, half of which have their own fireplaces. As an additional curiosity, in Early Modern times, the internal toilets were fitted with a grey-water flushing system, using gutters and drains from the roof above.

The tour winds through a couple of banqueting chambers – check out the Flemish tapestries on the walls of the ground floor chamber. The artists attempted to capture an image of exotic animals but, in a world before photographs and international travel, these beasts are bizarre and threatening monsters.

There are lots of little curiosities and interesting legends scattered throughout Burg Eltz. A chapel in one of the bedrooms juts out beyond the wall of the room – the idea being that no-one should be higher than God, so some architectural manoeuvring was required to get around the fact that there’s another bedroom on the floor above.

The Eltz Castle tour finishes in a dark and cool kitchen, where there’s evidence of a Medieval refrigerator – a store-cupboard cut into the cool, stone rock-face which could store milk and cheese for longer. Additionally, there’s a nice Medieval trick to keep food safe from prying rats and mice – hang it in baskets from the ceiling!

Visiting Eltz Castle: Getting There and Away

Burg Eltz isn’t exactly the most accessible castle in Germany; but it’s certainly possible to reach it by public transport or by car. If you’re driving, there are extensive directions on their official website.

If you’re making your own way there, the best place to stay is the town of Koblenz, a reasonably neat little place on the banks of the Rhine. There’s a variety of good places to stay in Koblenz, although everything is more modern and chainy than you might expect from a historic little German town.

My personal recommendation is the new and attractive G Hotel adjacent to the station – I stayed there and found it excellent value for money. I thought that the breakfast was mean, though. (The link above is an affiliate link to TripAdvisor).

Koblenz is about an hour or so by train from Cologne (Koln). From Koblenz, you’ll need to take a local train to the village of Moselkern (trains are about every hour; and take around 30min).

From Moselkern, the walking route to the castle is very well signposted, and you’d have to be a bit daft to get lost. There’s an initial 30min walk from the train-station to the hotel on the outskirts of the village, where the official trail to the castle begins. From there, it’s an easy 45min walk through woodland paths to the castle.

Note that neither Moselkern nor Burg Eltz have anything in the way of ATMs: don’t get caught out, and bring a chunk of cash.

I visited other German castles during my trip in 2012. I think you might like to read more about Heidelberg Castle, which is one of the most romantic ruins in the whole of Germany. Alternatively, why not discover touristy – but super-famous – Neuschwanstein Castle? 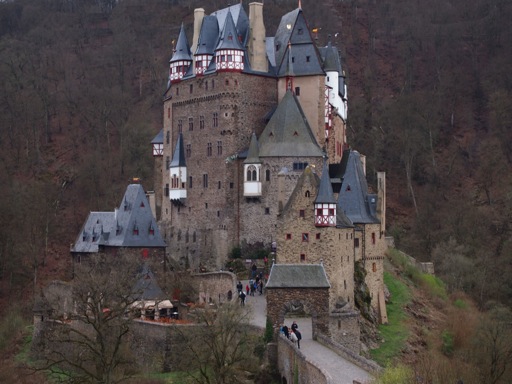 Burg Eltz (Eltz Castle) looks like something from a fairytale. This incredible German castle is hidden in deep woods, and is filled with tantalising secrets