Home » Life in a Castle

Life in a medieval castle would have been ordered and organised, full of pomp and ceremony, and also very cold and smelly!

Essentially, castles were at the heart of Medieval society.

Castles were built in England and Wales after 1066.  They cemented a new social system of feudalism in place. Each new castle secured the power of the local lord over his vassals.

To serve the lord, most castles would have been places of frenzied domestic activity.

Life in a medieval castle was filled with a constant hubbub of busied work in the kitchens, preparations for celebrations in the Great Hall, and religious worship in each castle’s own chapel.

And the layout of a typical Medieval castle tended to be influenced by domestic needs rather than defensive concerns.

Castles were constantly re-designed and adapted to provide the best possible defence against new and unwelcome threats. There were many different obstacles built to defend Medieval castles.

These obstacles included everything from moats (sometimes with spikes within) to gatehouses which contained all manner of obstacles, tricks and traps.

Some castles occasionally even housed prisoners in their dungeons. Prisoners were most often kept for political reasons, and were sometimes held in terrible conditions.

A Picture of Domestic Life in a Medieval Castle

When you’re exploring a castle today, it’s hard to grasp just how busy and how bustling that same castle would have been at the height of medieval times.

Castles were partially built to demonstrate the power and significance of their Lord and master, and would have had a vast retinue of servants who would have catered to the needs of the noble family.

How many people would have worked or lived within a castle? Well, it evidently depends on the size of the castle, but, for a site like Goodrich Castle in England, you could expect around 100-150 people to surround the Lord’s family.

These would have included everything from cooks to gardeners, grooms and horse-men, and all important treasurers, who would look after the finances of the entire estate.

The focus of domestic life in a medieval castle would have been the Great Hall, which was a common feature to almost every castle in England.

This large hall was the focus of hospitality, celebration and the pleasures of life in a medieval castle – including dances, plays or even poetry recitals. A Medieval feast would have included unimaginably rich foods – even roast peacock! – all loaded onto huge wooden tables.

Seating in the Great Hall was according to each individual’s status. The most important people would have been seated on a raised dais at the head of the hall, positioned above everyone else. If you were less important, though, you’d be seated by the exit doors on the wooden benches at the back of the hall!

Adjacent to every Great Hall would have been the – often sizeable – castle kitchen, where servants and cooks would have prepared the food for their masters and their guests. Medieval food and drink probably wouldn’t taste so good nowadays, though!

The Quarters for the Lord and His Family: The Solar

The Lord and the Lady were the heads of the household, but the Lord would often be out of residence. His duties would have generally called him to attend to matters of business or politics in London or other major cities. Often, Lords would be summoned to supervise or even participate in military activities further afield, too.

Generally, the Lord’s servants – such as his groom or chamberlain (master of his bedroom and expensive properties) – would travel alongside him, and return to the castle when he did. This meant, when the master was away, the castle became a quiet place indeed.

When the Lord and Lady were in residence at the castle, they would have had a number of chambers exclusively for their use.

Generally, in Medieval times, privacy was very hard to come by (read below for a rather alarming description of communal Medieval castle toilets!), and the Lord and Lady were granted the luxury of their own rooms, usually at the top of one of the towers or the castle keep. These rooms were generally referred to as ‘solar chambers’, thought to derive from the words of ‘solitude’.

In these rooms, they could enjoy privacy, comfort, and usually a greater deal of warmth and sunlight – as heat from the Great Hall would rise to warm up their private chambers.

Life in a Medieval Castle: Cold, Dark, and Very Smelly!

Don’t be tempted to over-romanticise the unpleasant realities of life in a Medieval castle. To our modern standards of living, most Medieval castles would have been incredibly cold, cramped, totally lacking privacy, and would have been disgustingly smelly (and likely home to more than a fair share of rats!).

Firstly, why were these castles so dark and cold? Well, most Medieval castles were made of stone. Although stone was a perfect material for creating strong, defensive fortifications, Medieval building techniques were basic.

This meant that most structures could only support tiny windows – which resulted in dark rooms that were constantly cold, as the thick stone could never be fully warmed by the sun.

Late-medieval developments in architecture and gothic castle design did improve on these problems, though, and castles built in the late 1200s began to have larger windows and lighter rooms.

Incredibly, fireplaces weren’t invented until the middle of the Medieval period. Until this time, all fires were open fires, which didn’t spread heat so effectively (and generated a lot of smoke!).

The invention of the fireplace made rooms warmer, as it heated the stones as well as the chamber itself. This made life in a medieval castle much more bearable.

When it came to sanitation, though, things were always truly disgusting. The link between sewerage and disease wasn’t made until the c18th, and medieval people remained blissfully ignorant about the health consequences of poor toilet hygiene.

Resultantly, most toilets (or garderobes) were nothing more than small antechambers, in which you’d find a bench with a hole in it. The, er, contents of the toilet would simply fall – usually from a great height! – into a cess-pool, or even into the moat. As the moat was generally stagnant water, it meant that the stench would have been unbearable – especially in the summer-time.

In addition to the lack of hygiene within the garderobe, there would have been a huge lack of privacy, too. Medieval societies didn’t really value privacy as we do, so most garderobes would have been a long line of benches with nothing to separate you from your neighbour as he went about his business.

Still, I guess it meant that you always had someone to chat to when on the toilet!

The Lord, His Servants, His Vassals and The Peasants: Feudalism, and the Structure of Life in a Medieval Castle

When castles arrived in England and Wales, they brought with them an entirely new social order: feudalism. The King, in effect, owned all the land in the country, and parcelled out chunks of it to loyal Lords, who could keep the land as long as they remained true to the King.

These chunks of land were called ‘fiefs’ – or ‘fees’. As Medieval times progressed, more and more Lords chose to build castles on their lands to exert power and influence.

Of course, the Lord couldn’t possibly farm all his land himself! Resultantly, the Lord allowed his own vassals (a term meaning people who were, in turn, indebted to him – the knights) to use some of his lands for their own gain. In return for their lands, the knights had to agree to provide the lord with military support in battle.

Who actually farmed the land? Why, it was the peasants, at the very bottom of this social pyramid! The entire Medieval economic and military system was a very complex pyramid of reciprocal duty – with the King, and his Lords, at the apex of the pyramid.

The castle was symbol of the Lord’s power, and therefore cemented the entire Medieval social system firmly in place. Life in a Medieval castle – with its hierarchical structure, noise, festivity and stench- was a microcosm of life in the wider Medieval society.

If you’re interested in reading more about Medieval castle life, I’d really recommend this book – Life in a Medieval Castle, written by Joseph and Frances Gies.

Unusually for an academic text, this book’s really easy to read!

It takes readers through the history of British castles, and provides lots of insight and understanding of Medieval life.

It uses Chepstow Castle (Wales) as its central focus, but considers many other European castles, too.

Click to discover more, or to buy, on Amazon. (Affiliate link) 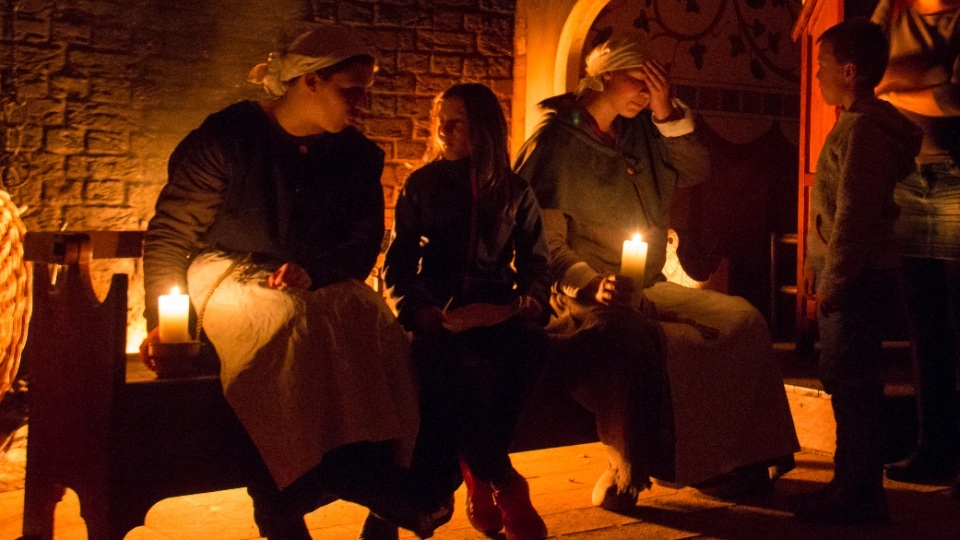 Life in a medieval castle would have been full of pomp and ceremony, but also very cold and smelly! Discover Medieval castle life - including the toilets!
I use cookies to improve your experience on this website. OK!Read more