What was a typical Medieval castle layout?

Well, there wasn’t a carbon-copy plan that was rolled-out across Europe.

Castle layout depended upon local demands, and the purpose and function of each castle.

For example, a castle built on the turbulent borders of England and Wales might have been built to be as strong and as defensive as possible.

Alternatively, castle in a more peaceful, prosperous part of Southern England may have been designed to culture an air of luxury and magnificence for a local Lord and Lady.

However, many Medieval castles shared similar features – defensive barbicans and deep moats, with a kitchen and a great hall; and a Keep (or donjon) at their heart. This is a plan of York Castle, which shows many of the key elements.

Although it’s not a totally perfect example (I struggled to find the ‘perfect’ one!), it’s still a very typical demonstration of the conventions and features of Medieval castle layout.

Farleigh Hungerford Castle was, first and foremost, a grand residence for the Hungerford family. However, the design of the castle still included many defensive elements, such as towers, a barbican, a gatehouse and a moat. It did play a small part in the English Civil War.

Here’s an image of the castle today taken from Google Earth. As you can see, it’s now quite ruined indeed. It sadly fell into significant disrepair in the 1700s.

The Different Buildings and Areas of a Typical Medieval Castle Layout

This is the layout of Farleigh Hungerford castle, as it would have been in Medieval times. You can compare it to the recent satellite image from Google, which you can see above.

This medieval castle layout diagram is adapted by from an original by HCHC2009 licence CC-BY-SA-3.0; via Wikimedia Commons.

The Keep was traditionally the heart of any Medieval castle layout. It was usually the tallest and strongest tower, situated at the heart of the fortifications.

In Medieval times, they wouldn’t have used the term ‘the Keep’.

Instead, they would have called this tower the don-jon (from the French, indicating strong-hold). Because this is too easily confused with dungeon (which confusingly now means something quite different), I always avoid using this phrase.

The keep was traditionally the strongest and the most fortified part of a castle – and, in early Medieval times, it’s where the nobles would have lived. In later Medieval times, as castles began to morph into grand residential buildings (from being fortresses), the nobles began to live in warmer, comfier chambers – and the keep became a strong-hold.

There were numerous different forms of keep design – the most interesting being the shell keep.

Over time, the construction of the castle keep would have evolved from being built from wood, to become built of stone.

The Moat and the Dam

Very few castles had the advantage of a fresh-flowing natural moat (formed from the loop of a river, for example).

Instead, moats needed to be man-made, by damming nearby rivers and streams to create a stagnant pool around the castle.

Although moats were great for defence – they partially prevented attackers from burrowing beneath the castle walls, for example – a stagnant moat would have been pretty unpleasant. Sewage would have been tipped straight into the stagnant water – imagine the smell in the summer!

The adjacent image which you can see of a castle moat is taken from Beaumaris Castle, one of the most impressive moated castles in the whole of the UK.

Many Medieval castles had moats to improve their defensive capabilities. I’ve written more about different hazards and obstacles of defending a Medieval castle, if you’re interested.

The kitchens would have been a frantic hubbub of activity. Entertaining important guests was a fundamental purpose of many castles – this helped secure the power of the castle’s Lord and Lady.

The size of a castle’s kitchen was often proportionate to the intended grandeur and importance of the castle. The most elaborate kitchens would have been all-set to cook and prepare game and fish, which had been caught when hunting in the castle grounds.

Discover more about typical Medieval food and drink (be warned: some of it sounds gross!).

The Bakehouse and Brewery

Bread was a dietary staple, so it shouldn’t be a surprise that many castles had their own bake-houses, which would have baked fresh bread for everyone living within.

Many castles had their own breweries. This wasn’t due to Medieval alcohol dependence – brewing beer sterilised (hugely-polluted) water, making it a much safer drink than sipping water alone.

In fact, beer was so important to Medieval life that a designated Ale Wife (yes, she was always a woman!) would have been in charge of the castle brewery.

Although round towers of Farleigh Hungerford castle were predominately decorative, many other castles built towers for practical purposes – to provide a vantage-point for archers to shoot at oncoming attackers.

Additionally, the advantage of round towers is that they couldn’t be toppled over that easily. Attackers had got wise to the fact that, by burrowing under the corner of a square tower, they would disrupt the foundations and collapse the whole tower.

Round towers didn’t, of course, have any corners – perfect.

As time went on, the design and construction of different towers became more grand and more ambitious. The octagonal towers of Caernarfon Castle are something quite special altogether.

Horses were incredibly valuable commodities in Medieval society – essential for transport, communication, and for use in battle. Indeed, for a Lord to be considered powerful, they would have needed war-horses.

Stables would have often included hay-lofts and space for the grooms to live. Archeologists working on Farleigh Hungerford castle have indeed discovered evidence for sizeable hay-lofts within this castle.

Every castle suffered a huge conundrum – people and supplies needed access to the castle, but building a route into the castle formed an incredibly obvious route for attackers.

It took castle designers a surprisingly long time to solve this problem. The solution they came upon was the Gatehouse.

The gatehouse was a fortified entrance, with numerous different doors and portcullises, tricks and obstacles, all used to guard the castle. It wasn’t uncommon to see two different gatehouses – one on the outer-castle, and one on the inner (if the outer one was breached).

A later solution again was the drawbridge. In actual fact, a chained drawbridge (as we think of it today) was an uncommon feature of a typical Medieval castle layout.

These designs tended to be added in later years. Instead, many castles used a pivoted system, where the a plank for a drawbridge was fixed on a ledge between two moats – like a big see-saw.

The photo you can see is of the impressive castle gatehouse of Harlech Castle, which you can discover in Wales.

The Barbican funnelled attackers through an obstacle course riddled with danger.

The Barbican was a further development in the defensive design of a castle. Whereas the Gatehouse simply protected the entrance to the castle, the Barbican was designed to be a deathly obstacle course, preventing attackers from even reaching the gatehouse.

Sneakily, the defendants of the castle could fill the barbican with deathly traps – slits for arrows, and holes for boiling-oil. This meant that the only way to the gatehouse was through an entrance riddled with danger and entrapment.

The barbican and the gatehouse were two important parts of Medieval castle defence, but there were many other obstacles and hazards built to protect Medieval castles from attack.

The Great Hall would have been a social focus of any Medieval castle layout. It would have been a bustling and exciting hubbub of activity – filled with staff and servants preparing for feasts and banquets, held at the discretion of the Lord and Lady.

When a banquet was on, the Great Hall would have been decked out to impress and entertain the most important visitors. Indeed, the guests of honour would have been seated on a dais (stage) at the front of the hall.

The further you were seated from them, the less important you were- right through to the least important visitors, on wooden benches at the back of the hall.

The Chapel and the Priests House

Christian belief (and, don’t forget, that England was Catholic prior to Henry VIII) permeated every aspect of life.

The presence of a chapel gave a castle a sense of prestige and significance within the local area.

But there were strategic advantages too. Harming a priest would be the ultimate act of barbarity – only the most fearless of castle attackers would even dream of doing such a thing.

The presence of a chapel (and the ‘safe haven within’) would be of practical use if the castle was ransacked.

Most castles didn’t have dungeons – in actual fact, dungeons are a bit of a modern-day obsession.

However, it’s something I’m always asked about, so I’ve written a special page on castle dungeons (undoubtedly the most asked-about part of any medieval castle layout!).

In Early Medieval times, castles didn’t really have dungeons – simply because the idea of keeping someone prisoner was, back then, a very strange punishment. However, as the Middle Ages developed, more castles became to be equipped with space for prisoners.

From this, modern ‘dungeons’ developed – secure places to hold prisoners and enemies of the castle.

Learn more about Life in a Medieval Castle

If you’ve found this page useful and interesting, I think that you’ll like to read about life in a Medieval castle – everything from the stench and smells, to types of Medieval toilets!

Alternatively, discover strange flavours – from roast peacock to other strange types of Medieval food and drink.

Or how about hanging out in a castle dungeon?! 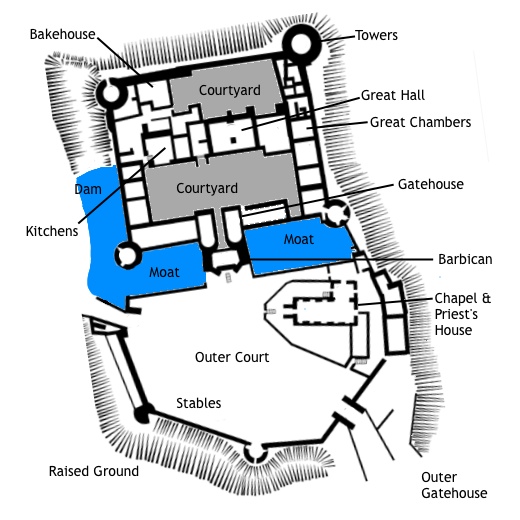 Medieval Castle Layout: The Different Rooms and Areas of a Typical Castle