The definition of a concentric castle is a “stone castle with at least two rings of outer walls, one inside the other”.

Another way of thinking about it is as “a castle within a castle”.

The two castle walls in concentric designs were designed to be two separate obstacles in the path of any attacker.

The floorplan of concentric Beaumaris Castle in Wales is a nice example of how these castles were laid out. (Scroll down to see it).

You can see how the thick inner wall – the stronger black line – is protected by an outer layer of defence.

There’s lots more to learn, though. In this section, we’ll look into the advantages and also the disadvantages of this form of castle design.

We’ll also consider when these castles were built, and where you can see some good examples of concentric designs nowadays. They’re almost synonymous with the country of Wales, in the UK.

One important note before we go on: concentric doesn’t mean circular.

The rings of walls around the heart of the castle could be any shape. Most of these castles were either square or polygonal.

However, these concentric designs were almost always symmetrical, unless rocky terrain or difficult surroundings prevented such a picture-perfect layout.

When Were Concentric Castles built?

First came basic motte and bailey earthworks; then we had timber castles; and then stone castles. Concentric designs were an evolution of the stone castles – still built of rock, but made to be extremely defensive and hard to capture.

Building concentric castles started in the mid 1200s, and the best examples were built in the 1290s and early 1300s.

The first example of this design was Caerphilly Castle in Wales – which was built in about 1270. Here, for the first time, the castle was designed to make the two rings of curtain walls into two separate obstacles for attackers to overcome.

In castles built before 1270, a double-ring of castle walls was only used to ‘reinforce’ the outer curtain wall.

However, Caerphilly Castle was a ‘new way of thinking’ about castle design.

Here, each wrapping wall was considered individually. Designers began to consider each different wall to be a separate obstacle for invaders to overcome.

This was a huge change in thinking – and the ‘birth’ of the concentric castle.

The best examples of concentric castles were built by Edward I, in North Wales. His shockingly expensive ‘iron ring’ of castles began in the 1290s, and many of the castles are near-perfect examples.

All these castles were designed in whole, or in part, by Master James of St George – Edward I’s right-hand architect, and a man bordering on genius.

Why Were Concentric Castles Built?

The strength of concentric castles can be summed up in one word: defence! This was a design that was absolutely formidable to attackers – in fact, these castles were virtually impregnable. They improved over older castle designs in many different ways…

At a glance: advantages of concentric castles

Overall, concentric designs were virtually impregnable to attackers and invaders. The only remaining option was to besiege the castle, and starve the occupants out!

The Defensive Strength of Concentric Castles

Any individuals wishing to attack the castle would have had to run a real gauntlet of hazards and obstacles in order to reach the centre of the castle, and capture this mighty fortress for themselves.

Look again at the blueprint and photo of Beaumaris Castle, just above. Imagine that you were an attacker and somehow – probably through luck – you’d made it through the outer curtain wall of the castle.

You’d now be in the area between the two curtain walls. Well, be scared. In Medieval times, this was nicknamed ‘the death area’!

To seize the castle, you’d need to breach the second (inner) curtain wall. However, archers would have been firing incessantly upon you from atop of that wall – you’d be a very easy target and there would have been nowhere to hide.

Bad news for you – I don’t think you’d have survived it!

So, attacking the castle seems hopeless. How could you have overcome such defences?

If your answer is “camp outside and starve ’em out!”, that’s not a bad idea. However, most concentric castles were even equipped to overcome siege.

These castles had wells built at their centre for water supplies, and some advanced designs were built alongside the sea.

The ‘sea gate’ of Harlech Castle ingeniously allowed food and provisions to be brought to the castle by ship, rather than by foot – bypassing those besieging the castle, and meaning that the castle could survive almost indefinitely.

The Disadvantages of Concentric Castles

It’s easy to see that these concentric designs were formidable constructions. However, despite these magnificent advantages, this type of castle design wasn’t always practical – or affordable.

At a glance: the disadvantages of concentric castles

Also, effectively, concentric designs became a ‘victim of their own success’. They were strong that intruders would try to starve out the castle by laying it to siege, rather than mounting a full-scale attack.

This strategy made a mockery of the huge amounts of money spent on elaborate defences.

Of course, this also highlights the another huge disadvantage of concentric designs – their vast cost. Edward I spent £22,000 on just one castle, Caernarfon – more money that the treasury took in an entire year!

All in all, the ‘iron ring’ of Welsh castles that Edward I built bankrupted him.

Although these brilliant castles were successful in overcoming the Welsh rebellions, Edward didn’t have similar funds to build a comparable string of castles in Scotland – and never managed to conquer the country.

Where Can I See Some Examples of Concentric Castles today?

The best examples of concentric castles can be found in Wales. Most are can be attributed to King Edward I.

The concentric castles which make up Edward’s ‘iron ring’ include: 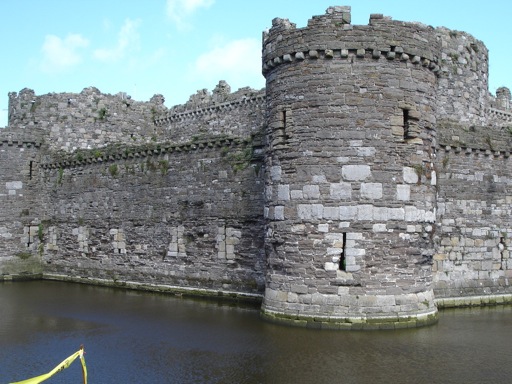 Concentric Castles: Advantages and Disadvantages of the Design

Discover the advantages and disadvantages of concentric castles, the mightiest design of any castle ever built. See photos and uncover the very strongest.