Researching the characteristics of gothic architecture? Well, the gothic style transformed castles, churches, cathedrals and pretty much the whole of Europe!

This form of architecture developed because of common architectural problems in Medieval times.

Back in the 1100s-1200s, building skills were extremely limited. Stone castles and cathedrals were rudimentary – dark, cold, and damp.

Gothic architecture tried to solve some of these unpleasant problems, and created light, pleasant and airy buildings. Before the gothic, architecture was functional. Now, architecture became beautiful.

This menacing gargoyle I discovered in Munich is a great example of gothic architecture. Why build a simple rain-gutter, when you could turn it into a monster?!

Some gothic buildings – particularly churches and cathedrals, such as York Minster, in York, England (the largest gothic cathedral in Northern Europe) – were rendered into awe-inspiring places of piety and worship, as a result of their phenomenal gothic design.

Many castles adopted some of the characteristics of gothic architecture, too. They became transformed from dank living environments into majestic, light and pleasant residences for the lords and ladies within.

An aside! ‘Gothic architecture’ is a retrospective term. Medieval people would never have used it.

Back in Medieval times, this form of building was called ‘the modern style’. More on the history of gothic architecture is contained later in this article.

1. Grand, Tall Designs, Which Swept Upwards With Height and Grace

In the times before gothic architecture, Early Medieval architects struggled to spread the weight of heavy stone walls.

This meant that towers needed to be short and buildings thin. Otherwise, the sheer weight of the high floors would make the building collapse into itself.

One of the fundamental characteristics of gothic architecture was its height. New building techniques (such as the flying buttress, detailed below) enabled architects to spread the weight of taller walls and loftier towers.

This all meant that gothic buildings could, quite literally, scale new heights. It allowed them to reach up to the heavens – perfect for cathedrals and churches.

The cathedral pictured above is York Minster – one of the many attractions of York, UK.

You’ll see that I’ve scattered photos of the Cologne Dom (Cathedral) throughout this page – see the pic just above. It’s one of the most visited tourist attractions in Germany, and miraculously survived the bombings of World War II.

It’s a phenomenal example of gothic architecture, exhibiting all seven characteristics of this amazing design style.

The flying buttress is the defining external characteristic of gothic architecture. These buttresses act to spread the weight of the tall walls. They support the structure by transferring force directly to the ground.

The flying buttress was not just practical, though. It was also decorative.

The innovation of the pointed arch was another key characteristic of gothic architecture. Again, its significance was both practical and decorative.

The pointed arch is a sturdy little design. Its form distributed the force of heavier ceilings and bulky wall. It could support much more weight than previous, simple, spindly pillars.

The stronger arches allowed for much more vertical height, too – they literally reached up to the heavens.

The gothic arch wasn’t just a workhorse. It had an aesthetic value and beauty which influenced many other features of gothic design – most notably the vaulted ceiling.

Malbork Castle, in Poland, has some excellent examples of pointed ceilings.

The vaulted ceiling was an innovation which lead on from the achievements of the pointed arch.

Irregular, vaulted ceilings utilised the technology of the pointed arch to spread force and weight from upper floors.

These sturdy supports allowed ceilings to be taller than before. (Although note that the ceiling height isn’t uniform). This provided the impression of height, grandeur and elegance.

The distribution of force within the vaulted ceiling enabled vaults to be built in different shapes and sizes. Previously, vaults could only have been small, and circular or rectangular.

The picture above is again an example from Malbork Castle, in Poland.

Click to continue to page two, to discover more characteristics of gothic architecture…. 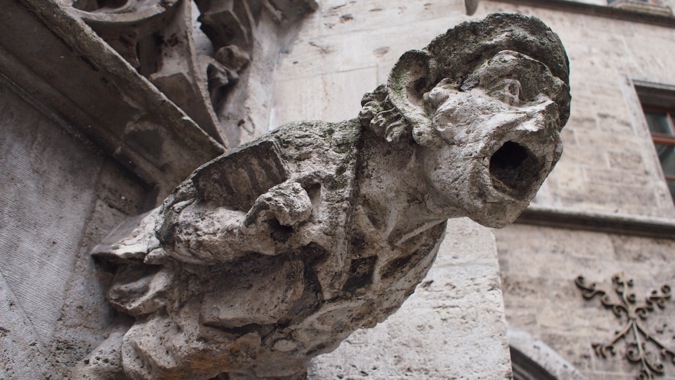 The Seven Key Characteristics of Gothic Architecture: From the Gargoyle to the Flying Buttress

Discover the seven key characteristics of gothic architecture, from gurning gargoyles to delicate vaulted ceilings. Includes photos and references.
Loading Comments...
I use cookies to improve your experience on this website. OK!Read more