There are many myths and misunderstandings about the castle dungeon.

Many people imagine dungeons to be dank, dark and deep vaults below a castle, where prisoners were held – and where the unluckiest among them were tortured.

However, this image doesn’t really hold true. The castle dungeon evolved, strangely enough, from being a prison within the tallest, most secure tower of the castle. Dungeons weren’t always underground!

To understand the truth about dungeons, I’ll start off explaining the history and purpose of the first Medieval dungeons.

I’ll also describe a punishment even worse than a dungeon – the oubliette – or the ‘forgotten chamber’, which was used to keep prisoners in horrific captivity.

I’ll also take you on a tour of some of the most feared dungeons in the whole world.

What Was the Purpose Of the Castle Dungeon?

Most castles built during the early Medieval period didn’t truly have dungeons. Why not? Well, in Medieval times, it wasn’t a particularly common punishment to keep someone imprisoned in a confined space.

Often, one baron would kidnap the children of another baron, and hold the poor kids hostage at his home or his castle. However, the unfortunate children would be free to roam the castle – but wouldn’t be able to leave it.

Medieval castles did have an area called the don-jon – a term which comes from French. But back in Medieval times, the don-jon was the name for the Great Keep, or the main tower of the castle.

Originally, the Great Keep was the most secure part of the castle – and, in Early Medieval times, nobles tended to live in the Keep, as it reflected their importance.

However, as time progressed, the nobles began to live in more comfortable and luxurious areas of the castle – in bedrooms designed for warmth and luxury.

However, the Great Keep remained as the most secure place at the heart of the castle. Valuable items – such as jewels, money and also important prisoners – began to be stored in this secured tower.

In later Medieval times, the concept of taking political prisoners became much more common. When Edward I was trying to subdue the frequent rebellions in North Wales, he saw the value of capturing and imprisoning the biggest trouble-makers.

Therefore, his new castles of the late 1200s – including Caernarfon, for example – contained new prisons to keep the rebellious Welsh at bay.

Initially, these prisons were in towers – these were considered to be the strongest parts of the castle, and the areas which could be best-defended if a prisoner wanted to escape. Eventually, these new prisons began to be called ‘castle dungeons’, which was an English adaptation of the old French words of ‘don-jon’.

During the later Medieval period, castles became grander and more ornate – designed more for entertaining, and as luxurious residences of nobles.

As castles changed, these ‘don-jons’ – prisons – began to be located in the least desirable (but still secure!) areas of the castle, where people certainly didn’t want their bedrooms or apartments. This meant the cold, wet and dark storerooms or castle basements became these new castle dungeons.

It’s strange, isn’t it, that dungeons moved from within the highest castle towers, down into the lowest castle cellars.

The Oubliette – A Punishment Worse Than Castle Dungeons

The Oubliette – or the ‘forgotten room’ – was a punishment worse than being thrown into a castle dungeon. If you can remember the ‘chokey’ from Roald Dahl’s ‘Matilda’, the oubliette was a very similar punishment.

The oubliette was a tiny, vertical shaft which was often only large enough for an individual to stand up in – they wouldn’t have been able to crouch down, to kneel, to sit, or perhaps even to turn round in it.

In the oubliette, the prisoner would have been forced to remain standing, in the dark, until they were released – if ever.

Food and water might have been thrown down to them if they were lucky (or if their survival was seen to be important), but it was, all in all, a truly horrible punishment.

An example of an oubliette can be discovered in the Bastile, in France.

The Most Famous – And Most Notorious – Castle Dungeons Around the World

“Pontefract Castle dungeon were so notorious, they were depicted in Shakespeare’s play, Richard III.”

The most terrifying castle dungeons in the whole of England were undoubtedly those of Pontefract Castle, in Yorkshire.

Pontefract Castle was a vast and fearsome fortress with a blood-curdling reputation – it was so notorious that it was depicted in Shakespeare’s play, Richard III. In the play, Earl Rivers describes Pontefract (then Pomfret) as: “O Pomfret, Pomfret! O thou bloody prison! Fatal and ominous to noble peers”.

Pontefract Castle was used as a prison in the 1300s, and King Richard II of England was almost certainly murdered in cold-blood in the castle dungeons.

The dungeons where huge, and extended across a number of different rooms, all around 35ft below the main bulk of the castle.

During the English Civil War, the dungeons of the Pontefract Castle began to be used as stores for ammunition and weaponry for use during the conflict.

Today, it’s possible to tour the old armour stores, and you’re still able to see the graffiti that the old prisoners scratched into the walls of their prison.

The castle dungeons of Chillon in Switzerland are also famous from being featured in literature.

Lord Byron, the famous British Romantic poet, visited Chillon Castle in the 1800s and became fixated with the plight of François Bonivard, a political prisoner who had been held in the deep dungeons of Chillon Castle, during the 1500s.

Bonivard was lashed to the fifth pillar of the dungeon, and was to be kept imprisoned for his life as he was seen as a troublesome political dissident.

However – luckily for him! – after four years of imprisonment Chillon Castle was captured, and he was released and able to free to safety.

Lord Byron was very interested in the imprisonment of Bonivard – it fit into his romantic ideals of an isolated voice trapped outside cruel society – and wrote a poem about his time in the dungeon.

The dungeons themselves are at sea-level, with impressive gothic arches which make anyone inside feel helpless and tiny in the face of such great power and architecture.

The Tourist-Trap Experience of the Dungeons of Warwick Castle, England

If you’re looking for a bit of gory ‘fun’ (and historical accuracy isn’t too important to you!) then you could always take a trip to the dungeons of Warwick Castle, England’s most commercial heritage attraction.

Warwick Castle is undoubtedly one of the grandest remaining castles in England, but it’s presently owned by a theme-parks operator.

The result is a scare-fest dungeon that’s filled with macabre sightings, gory torture implements, and even its own in house ‘torturer’, who pops up occasionally to scare tourists (into parting with even more money, presumably).

All in all, it’s a fun twenty-minutes which recreates the feelings of claustrophobia and panic of being trapped in a dungeon – but it’s not really an authentic historical experience.

If you’re interested in other crucial parts of a fortress, discover more about defending a Medieval castle – everything from the vast gatehouse to the deep, dark moat and the dastardly traps hidden within it… 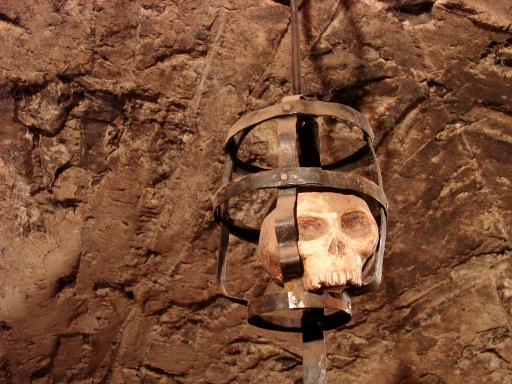 The Castle Dungeon and the Oubliette: The Truth About These Medieval Prisons

Discover the grisly secrets of the castle dungeon and the oubliette. Uncover dark stories from castle prisons from all over the world.
I use cookies to improve your experience on this website. OK!Read more